Coronary Bypass Surgery: What Patient Looks Like Right After 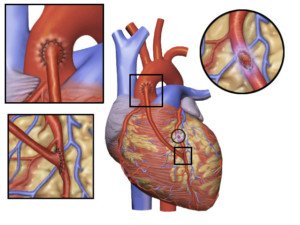 After coronary bypass surgery, what exactly does the patient look like?

What should family members expect to see when they walk into the ICU where the patient just arrived after undergoing coronary bypass surgery?

There are many variables when it comes to coronary bypass surgery (aka CABG).

My mother underwent a seven-hour operation that included mitral valve replacement, and she had five coronary arteries bypassed.

But I don’t think the way my mother looked in the ICU the day that the CABG was completed would have differed had the operation lasted only four hours.

Expect to see the following in a patient the day post-op coronary bypass surgery, and don’t be alarmed:

Of course the legs will be swollen; that’s usually where the graft-vein is taken from. This is trauma to the legs and will cause fluid buildup.

The entire body is severely traumatized during CABG, and this includes the kidneys, which when normal, prevent fluid buildup in the body. Damaged kidneys will result in body-wide fluid retention.

A few days after CABG, my mother’s weight had shot up to 172. Pre-operation it was around 142. Her face was puffy and a bit discolored. The legs and arms were yellowish.

You’ve heard this saying when someone describes a hospital patient.

You’ll think this upon seeing your family member or friend fresh from coronary bypass surgery, and all the tubes will be there while they are in ICU.

Tubing will include one for urinary output (leading to a bag on the floor) and one or two that are draining fluid from the lungs (leading to another bag).

In an episode of “The Golden Girls,” Rose is visited in her hospital room the day she has a coronary triple bypass.

If you see enough of these kinds of scenes, you’ll be that much more shocked upon seeing what it really looks like after a person has had CABG.

The “Golden Girls” scene was fake on every level. There wasn’t even an IV hookup!

Patient May Be Unresponsive

It was around 12 noon when she was extubated … that is, the breathing tube from the general anesthesia was removed from her throat.

Extubation does not occur until the patient is conscious enough to follow breathing commands by the nurse.

If this didn’t happen till nine and a half hours after the CABG, then don’t be surprised if your loved-one still seems under anesthesia by the time you visit.

We visited shortly after extubation and my mother was non-conversational, could barely keep her eyes half open for more than several moments, and what few words she could say were feeble and slurred.

I’m inclined to believe that nobody just talks, like Rose did, the day post-op coronary bypass surgery.

You’ll see a lot of technology in the patient’s room and will wonder what it’s all for.

The machines are programmed to make beeping sounds when readings get to a certain point (or when medication runs low), such as blood pressure too low, heart rate too fast or heart rate fluctuating.

I will never forget the sound of the beep that signaled that my mother’s heart was “popping into” atrial fibrillation. This kept happening.

It got to a point where if I heard this same kind of beeping coming from another room, I’d get unnerved.

But after a while the occurrence became routine, and I became more desensitized to the beeping.

In summary, what a patient looks like right after, and even two or three days after, coronary bypass surgery is not pretty.

Expect lots of swelling, “thunder thighs” on a woman who, pre-surgery, had trim thighs, and arms “twice their normal size.”