Best Way for Obese Children to Walk on a Treadmill 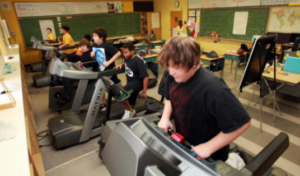 Look at the photo above of the overweight boy on a treadmill.

This appears to be a non-posed shot, versus models being told to take specific positions instructed by a photographer.

The first boy is overweight (though not a lot), and appears to be tightly holding onto the treadmill as part of his jogging, rather than taking a momentary heart rate check.

I doubt that a child this young (looks around 11 or 12) is going to be thinking about heart rate.

So it’s safe to assume he’s holding on for the duration of his jog. This overweight child appears to be jogging due to his hair’s appearance.

Overweight children, even if they’re in poor shape, should not hold onto a treadmill when jogging or when walking.

When I was a personal trainer I had my adult clients (regardless of age or weight) walking and jogging without any holding on. The reasons for this apply to kids, even overweight ones.

“Obese children should be encouraged not to hold on while walking on a treadmill,” explains Dr. Charles J. Pelitera, assistant professor of kinesiology and also coordinator of the Health/Wellness Program at Canisius College, NY.

“The chances are that one of the reasons that they are obese to begin with is that they had never been mentored in exercise or in the proper use of exercise equipment.

“Right at the beginning I would try to instill good positive habits such as keeping the hands free while walking on a treadmill.”

In a situation OFF the treadmill, in which the boy in the photo would be running (soccer, basketball, football, outdoor play, chasing around in the schoolyard, etc.), would there be anything for him to hang onto? NO.

What is he training his body to become efficient at by holding on?

Nothing. This is an unnatural way to move and will not make him better at running in a real situation, be it sports, play or running from harm.

You can clearly see what the gripping is doing to his posture and shoulders. This is poor running/jogging form.

It also won’t do much for facilitating weight loss or stamina.

Kids don’t know better, and it’s up to the adults supervising to correct this mistake.

Note the third boy down (don’t try to figure out what the second boy is doing; he appears to be momentarily placing his hand on the treadmill rail as he sits on a stationary bike).

The third boy appears to be a little overweight, but he’s jogging on the treadmill correctly.

Look at the fourth boy in yellow. He appears overweight and is holding onto the side rails. Note his forward posture.

If he were to swing his arms, his posture would straighten. You need not be a chiropractor or personal trainer to see how wrong holding on is.

I doubt these boys fear falling off. It’s more likely that they just don’t know better. They see the bar and rails, and thus, reflexively hold onto them.

Perhaps they’ve seen adults doing this and are mimicking them. Maybe the supervisor told them to do it because that person doesn’t know better.

But regardless of the reasoning, overweight kids should not hold onto a treadmill when walking or running. 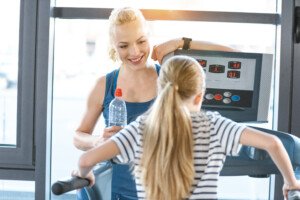 Whether overweight or not, when a child holds onto a treadmill, it distorts their gait and may result in sore shoulders or back discomfort.  Learning to swing the arms will utlimately result in a much more comfortable walk. Depositphoto.com

Overweight kids who fear falling off should start at a slow-enough pace that makes them feel comfortable, and then the speed can be gradually increased.

Having children hold onto a treadmill will do absolutely nothing to empower them or make them feel confident.

Dr. Pelitera is the owner of Pelitera Fitness Consultants, which specializes in athletic training, weight loss and strength training.