Best Ways to Prevent a DVT after Joint Replacement Surgery 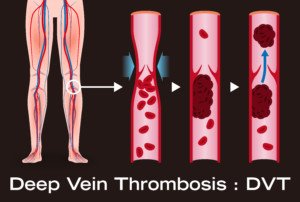 The complication of DVT following joint replacement surgery can lead to a fatal pulmonary embolism.

Therefore, the best prevention tactics for a DVT must be put into place.

Other high risk surgeries for DVT are that of pelvic and intra-abdominal, says David Fisher, MD, Director of the Total Joint Center at the Indiana Orthopedic Hospital.

“There are several options available to reduce the risk of DVT/PE including a combination of pharmacologic agents (blood thinners), sequential compression devices worn on the outside of the legs or feet, and rapid mobilization postoperatively,” says Dr. Fisher.

What the Patient Should Do Preop for DVT Prevention

If you’re planning on having joint replacement surgery, the smart thing is to ask your doctor what measures will be taken to help prevent deep vein thromboses.

Don’t just assume everything will be taken care of, and don’t think for a second that you, as the patient, don’t have the right to inquire about this.

These agents affect the clotting cascade at different locations and act as anticoagulants.”

These drugs, but least likely aspirin, pose the potential risk of internal bleeding, since they thin the blood.

Nevertheless, in general, they definitely do reduce risk of deep vein thromboses.

Without preventive or prophylactic measures, the risk is 45 percent, says Dr. Fisher. With preventive measures, DVT risk drops to one to two percent.

One-tenth to one-half percent of joint replacement patients develop a PE, which comes from a DVT when the blood clot breaks loose and travels to the lungs.

Sudden chest pain and difficulty breathing are the two most common symptoms of a pulmonary embolus.

Is any particular preventive measure the most effective for DVT prevention?

“It is not clear which is ‘The Best,’ as they have all been proven effective,” says Dr. Fisher.

“Many surgeons like the simplicity and safety profile of aspirin and compression stockings, but there is controversy regarding the effectiveness of that combination and lack of acceptance by the American College of Chest Surgeons and the Center for Medicare Services, making it harder for surgeons to utilize this strategy,” explains Dr. Fisher.

As mentioned, the non-aspirin blood thinners are more effective than aspirin, but do come with postoperative bleeding as a possible side effect, and this can require additional surgery to correct.

“My preference is a pharmacologic agent with compression stockings and rapid mobilization (up in a chair the same day of surgery),” says Dr. Fisher.

“We have used Coumadin, Arixtra, and currently use Xarelto with the other strategies, and have maintained a DVT rate of one percent and PE rate of 0.2 percent over the past 20 years.”

Dr. Fisher has been involved in research and development of total hip and knee implants and has had numerous articles published in professional journals, and has participated in many research projects.