Causes of Fluttering Heartbeat After Lying Down 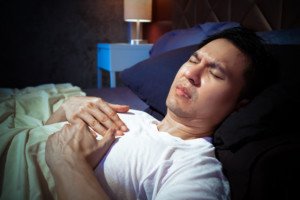 A cardiologist explains what can cause palpitations or the feeling of skipped heartbeats after you lie down.

So you get into bed and are ready for the night’s sleep, and only a few minutes later, your heart suddenly skips a beat or flutters.

You’ve noticed that usually when you feel a skipped beat or fluttering—palpitations—it’s very soon after settling into bed for sleep. Why is this?

The cause of a fluttering or seemingly skipping heartbeat, soon after getting into bed, is anxiety and stress. 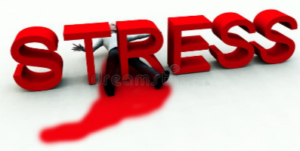 After all, the minute your head hits the pillow, you may become inundated with the stress of all the things you have to do the next day.

“Yes, this is usually the cause,” says Robert M. Davidson, MD, a cardiologist with SignatureMD.

“Also, it is easier to feel your heartbeat when lying down and it is quiet, especially if you are lying on your left side.”

Now that we know it’s usually stress and anxiety, fretting about the next day’s tasks, that causes palpitations or fluttering, just what is the mechanism behind this annoying phenomenon?

“It is due to an increase in both adrenaline, released from the adrenal glands at times of stress, which has a direct effect on the heart, and to an increase in involuntary nervous stimulation of the heart (the sympathetic nervous system), which also stimulates the heart,” says Dr. Davidson.

“Both of these stimulants are part of the normal adaptive response to stress, the fight or flight response, which causes the heart to beat faster and harder,” adds Dr. Davidson. So here’s how it works:

You’re overwhelmed with anxiety and stress either about the next day’s tasks and/or what happened earlier that day.

The body gears up for a fight or flight. Modern man’s fight or flight response is identical to that of primitive man’s, even though the source of stress and fear is different.

Caveman’s stress was chasing after animals to catch them to feed his family, or fleeing from animals wanting HIM for dinner.

The body responds the same way to ancient and modern stressors, and this includes alterations in pulse.

“But in people who are subject to arrhythmias, these responses can cause extra heartbeats, and sometimes a more sustained arrhythmia, such as PSVT or even AF,” adds Dr. Davidson.

So, does this mean that the next time you lie down for sleep and your heartbeat flutters or skips, you probably have a rhythm disorder?

Dr. Davidson says, “In most cases, it is either due to a faster and stronger heartbeat, but not an abnormal rhythm, or to extra heartbeats, which may cause a sensation of skipping and/or pounding of the heart.”

If this problem plagues you most nights, try this:

Do one minute of your hardest exercise such as squat jumps, squat thrusts, burpees, jump lunges, pushups or sprinting on your treadmill. 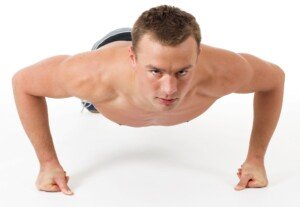 And I mean DARN HARDEST for 60 seconds, so that at the end, you’re gulping air.

This one minute of strenuous exercise will trick the body into thinking you engaged in the “fight” part of the fight or flight response.

This approach may calm down your heartbeat, once your rate returns to normal after the exertion.

Dr. Davidson is with the Division of Cardiology at Cedars-Sinai Medical Center, Los Angeles, and has been practicing for 30+ years. Areas of specialty include coronary artery disease, heart attack and palpitations.