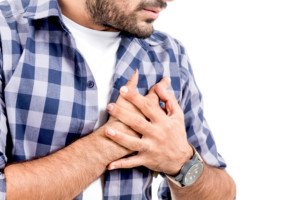 Is your thumping heartbeat scaring the daylights out of you?

Does your heart go ba-ba-BOOM, ba-ba-BOOM for no apparent reason?

Even if you’re young and athletic, a thumping heartbeat can be scary and make you wonder if a heart attack awaits you around the corner.
A “thumping” heartbeat can also be described as an extra heartbeat.

Ask yourself these questions:

Does the thumping, extra or irregular heartbeat usually come when you’re not exercising?

Are there no other symptoms with it?

Do you feel fine otherwise?

And, do you find that you are most aware of a thumping or extra heartbeat when you start thinking about it?

If so, anxiety is usually to blame.

Nevertheless, heart health should always be taken seriously, which is why I asked questions about thumping heartbeats to Dr. Frederick Ehlert, MD, cardiologist with the Cardiac Electrophysiology and Pacing division at ColumbiaDoctors Eastside, NYC.

Is there a way to tell when a “thumping” heartbeat is stress related, versus indicative of a serious condition?

Dr. Ehlert: It’s hard to know what is meant by “thumping,” and the context of the sensation is also important.

a) It could simply mean feeling your heart beating. This assumes the heartbeat is the normal one, at normal rates, but that the person simply feels the heart beating in the chest.

This could be due to a heightened awareness of the heartbeat or the heart contracting more vigorously than usual given the person’s level of activity (i.e., it would not be abnormal to feel this after physical exertion.) This would not be dangerous.

b) It could mean the sensation of a skipped or irregular beat, sometimes described as a “thump.”

As stated, these extra beats come early, arise from either the top (atria) or bottom (ventricles) chambers of the heart. As isolated phenomena these are not usually dangerous.

c) It could mean the sensation of a rapid abnormal heartbeat called an arrhythmia.

An arrhythmia, like the isolated extra beats, can arise from either the top or bottom chambers of the heart.

Depending upon where they arise, what sort of heart disease (if any) they are associated with and what symptoms occur (in addition to the sensation of “thumping”), some arrhythmias can be dangerous.

None of these are what is typically called “having a heart attack,” which is associated with blockages in the arteries supplying the heart with blood.

The symptoms associated with a heart attack can be pain (usually in the chest but occurring anywhere from the jaw to the belly button), nausea, sweatiness, and/or shortness of breath.

Why is it that a person, under stress, is more likely to experience the thumping and skipping, while seated and at rest, versus while moving around, especially exercising? 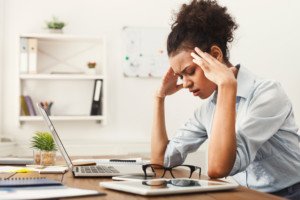 An uptight person will feel the thumping while watching TV or at the computer, but it won’t be there while they’re walking up a hill.

I am assuming that “thumping” refers to either a or b above. This occurs under stress because levels of adrenaline (and substances like it) can go up with stress.

Adrenaline can make the heart beat more vigorously, hence the sensation of feeling it beat, or may trigger the extra beats referred to above.

Several things can explain the phenomenon described in the question.

Often, when a person is sitting still, they are more likely to experience thumping because their mind is not focused on other things.

In addition, with exertion the heart should beat more vigorously, so a person is less likely to feel abnormal.

Also, extra beats may be suppressed when the normal heartbeat goes faster (as it does in exercise).

When someone has a thumping heartbeat, what would have to signal that it’s time to make a doctor appointment (short of the jaw pain, sweating, etc.)?

Is there a type of thump that means heart ailment?

The symptoms I described above that are frequently associated with a heart attack, should be evaluated immediately.

In addition, associated lightheadedness, dizziness, fainting or near-fainting should also be evaluated.

If the “thumping” is troublesome, occurring frequently or impacting the person’s ability to work or play as they wish, they should probably be evaluated in a non-emergent fashion.

A physician will try to identify the heart rhythm underlying the person’s symptoms of “thumping” and institute some form of  treatment (cardiac or otherwise).

The premature heartbeat can also be triggered by nicotine, caffeine, gas and fatigue.

A thumping, fluttering, extra or “skipped” heartbeat can also be caused by (no particular order): mitral valve prolapse, hyperactive thyroid, electrolyte disturbances, smoking, alcohol, lack of sleep, and this can’t be said enough: anxiety, especially over a thumping heartbeat.

Dr. Ehlert’s areas of expertise include sudden cardiac death and heart rhythm disorders. He has authored over 40 peer-reviewed papers, reviews and book chapters in electrophysiology.

How Many PVCs Mean Occasional vs. Frequent per Hour or Day?

Are PVCs Connected to GERD in any Way?

Can Prilosec Cause Heart Palpitations or PVC’s?

3 PVCs in a Row, but Structurally Normal Heart

How Often Do Heart Attacks Come After PVCs?