How Often Do Heart Attacks Come After PVCs? 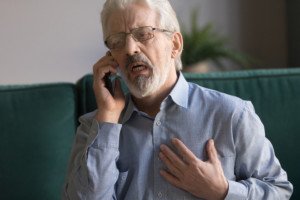 Do your premature ventricular contractions (PVCs) keep making you think that they mean a heart attack is coming?

There are some people for whom, no matter how many premature ventricular contractions they experience, and no matter what span of time these episodes have occurred (even years), they struggle with the same fear every single time a PVC occurs: “Will THIS be the one that causes a heart attack?”

For such individuals, which include those in their 20s, the millionth PVC is just as fear-inducing as the ones they had five years ago.

Each episode “resets” you to that baseline fear of a heart attack about to happen.

Here is good news: You do NOT have to live this way!

Is there any data on the percentage of heart attacks that are preceded by PVCs?

“Unfortunately there is no data to determine which percentage of heart attacks were preceded by PVCs,” says David N. Smith, MD, a board certified cardiologist with Dynamic Health in Charlotte, NC.

“This data will be limited by those who survived. Recall-bias, or the ability to remember what occurred during the event, also limits reporting.

“Nonetheless, PVCs are not considered a precursor to heart attack. Nor do PVCs reflect a recent heart attack or heart damage.”

Dr. Smith says that premature ventricular contractions can occur in a normal heart but also a damaged heart (the damage being from something unrelated to PVCs).

“In and of themselves, the presence of PVC is not risky,” he says, and are not a crystal ball into whether or not a person is likely to suffer a heart attack.

“Many who have had heart attacks also get PVCs, and that may reflect a damaged heart,” says Dr. Smith.

“But the PVCs will not have been in the foretelling symptom, only a coincidental finding.”

If this isn’t clear, think of it this way: A person has a heart attack. It’s discovered there’s scar tissue (from past viral infection) on the cardiac muscle.

But this doesn’t mean that the scar tissue caused the heart attack.

“At some point, nearly everyone experiences PVCs. They are more of a reflection of the balance between the underlying adrenaline levels in the heart’s sensitivity.”

Dr. Smith is a published author, national lecturer and Yale-trained physician-scientist certified by the American Board of Internal Medicine in Cardiovascular Disease.