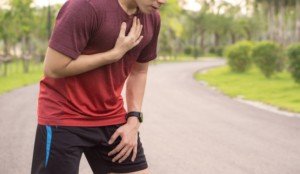 Have you been having PVCs right after you stop exercising, as in, you’ve been running on a treadmill or doing the burpees or pushups, and within seconds of ceasing the activity…you feel the premature ventricular contractions?

Does this mean you’re in trouble, as in, a future heart attack is awaiting?

If you just sprinted 14 mph for 30 seconds on the treadmill…chances are, you do not have cardiac pathology.

Nobody can just run like this. It requires training to get to this ability, even though it’s not exactly collegiate track team skill.

But a person with a pathologically compromised heart will not be able to sustain the training that’s required to reach this level.

Try it sometime: A young adult just starting an exercise program will be tossed off a treadmill or forced to step off if they attempt to run it, WITHOUT holding on, at 14 mph.

Another issue to consider, if you’ve been having PVCs post-exercise, is the anxiety factor.

You just rapidly squatted deep for 20 repetitions while holding a 40 pound medicine ball. You now feel the PVCs as you take a seat to catch your breath.

Chances are not high that there’s heart pathology involved, simply because this level of exercise—though not Olympic caliber—requires a trained body.

Many people off the street can’t even pick up a 40 pound ball, much less squat 20 times in a row with it.

Do you feel anxiety after finishing a set or ceasing an aerobic-based burst?

The anxiety may be from worrying about your exercise performance.

It may be from concern that an injury still hurts—did the set just make the injury worse?

And maybe you’re worried about PVCs in general and heart attacks, and after completing your intense exercise set, you started thinking about PVCs…and voila…you felt a few! 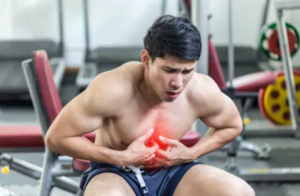 The adrenaline is going like mad, spurred by the exercise, and then spurred even more once you come to a rest and begin worrying about PVCs.

The conditions, then, are ripe for PVCs, since these can be triggered by adrenaline from anxiety over having a heart attack.

If you notice that PVCs regularly come right after exercise in the absence of anxiety, this increases the odds that there’s cardiac pathology.

Dr. Lepor says, “People with PVCs associated with activity should undergo a routine cardiac exam including a stress test and echocardiogram.”

If you fear a heart attack, don’t put off making the doctor appointment.

Having performed over 4,000 coronary angiograms and angioplasties, Dr. Lepor has focused on prevention and treatment of coronary heart disease.