Can Cancer Cause Foul Smell from Nose? 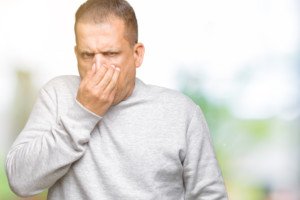 An ear, nose and throat doctor addresses the various causes of a foul odor from the nose, including after blowing.

Ewww, what is causing that foul smell from your nose, you wonder—or someone dear to you wonders.

“A foul smell after blowing the nose may be caused by a sinus infection (this typically is associated with fever and pain in the teeth with nasal congestion), or old mucous in the sinuses,” says Dr. Stacey Silvers, MD, of Madison ENT & Facial Plastic Surgery in NYC, who is board certified in otolaryngology.

“If mucous is not able to clear from the sinuses or the nose, it gets old and bad smelling,” continues Dr. Silvers.

“Occasionally acid reflux can cause a bad smell from the nose.  Stomach contents have a bad odor and can reach as high as the back of the nose.”

Dr. Silvers adds that a chronic sinus problem will not present with fever, but an acute one may.

“Patient may or may not have nasal congestion, but may simply present with fatigue, a bad odor in the nose after blowing and/or pressure over the cheeks and forehead.”

Dr. Silvers recommends trying a neti pot (which can be purchased at a drug store; example below), which is a tea-kettle-shaped pot that you use to rinse the nasal airways with a special rinse (that the store will also sell). 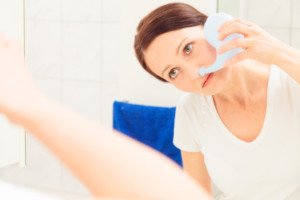 If this doesn’t resolve the problem, then see an ENT doctor for a nasal/sinus exam and a culture, says Dr. Silvers.

But what about cancer as the cause of a foul odor from the nose?

Dr. Silver says, “Very rarely we find cancer in the nose or in the back of the nose.  If symptoms persist then the person should see an ENT for a good nasal, sinus and nasopharynx exam.”

What about children with this notable symptom?

Dr. Silvers says, “If the foul smell is noted on your child and there is drainage from only one side, it is most likely that the child has a foreign body in the nose.”

The foreign body can cause a foul odor that may not necessarily be pinpointed to the child’s nose.

Rather, it may be a bad smell about the child’s face, so if your child’s face or even head has a bad odor, consider the possibility that there is indeed a foreign object at the root of the problem.

“Chronic drainage from both sides may be from a chronic adenoid infection,” says Dr. Silvers. “A nasal culture and physical exam will be diagnostic.”