Trouble Breathing Your Through Nose? Should You Worry? 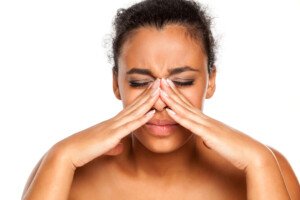 Difficulty breathing through the nose can be a pretty frightening experience when you swear you don’t have typical nasal congestion.

What may initially come to mind is the onset of a heart attack, since most people know that the so-called shortness of breath is a common symptom of a heart attack — as well as chronically clogged coronary arteries.

Breathing Problem: Trouble with the Nose

“Shortness of breath” is not the same as the sensation that despite deep breaths, you’re just not getting in enough air.

Trouble breathing that feels as though it’s originating in the nasal passages is probably exactly that: an obstruction in the sinuses or nostrils.

“The causes of nasal obstruction are two: structural and congestion,” says Dr. Stacey Silvers, MD, of Madison ENT & Facial Plastic Surgery in NYC, who is board certified in otolaryngology; one of her specialties is sinus surgery.

“Most people have a combination of both,” continues Dr. Silvers.  “Structural causes are a deviated septum (which everyone has to one extent or another).

“The septum is simply the cartilage and bony wall that separates the right nostril from the left nostril.  It is the tent pole which holds up the nose.

“The second structural blockage can be large adenoid tissue.  The adenoids are the ‘tonsils’ behind the nose; they are lymphatic tissue which typically gets smaller as a person ages.

“If enlarged into pre-teen, teen years or adulthood, they can affect the nasal breathing and quality of life and may need to be removed.

“The third structural blockage can be nasal polyps. These form from severe allergies and are an overgrowth of the mucosa in the nose forming single or multiple nasal polyps.

“Congestion, most typically, can be caused by allergy or a virus.  This is when the tissues in the nose swell as a response to allergy or viral nasal inflammation.