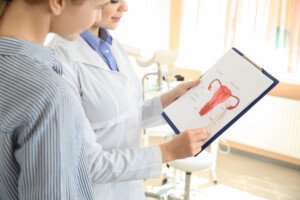 Short of surgery, can a doctor tell the difference between an ovarian cyst and cancer?

Some time ago, I had an MRI for a suspected groin injury. I got a phone call and the exact words were: “You have an ovarian cyst.”

It was then recommended I have a follow-up ultrasound to get a better look at the finding. Right away I began wondering about cancer.

The ultrasound showed the “mass” alright, but the gynecologist was not able to determine with 100 percent conviction that this was just a harmless benign development.

Another possibility (the most likely, according to him) was a “follicular cyst,” which was leftover from the menstrual cycle.

I was told to have a follow-up ultrasound in 30 days to track the image, to see if it was getting bigger or smaller. Size changes are suggestive of composition.

Ultrasound cannot definitively diagnose masses in ovaries, and this includes the corpus luteum cyst (different from the follicular), which is the empty “shell” of a follicle from which an egg is released every month.

Due to its unreliability, ultrasound has created many “false positive” results.

This has caused tremendous anxiety and even unnecessary exploratory surgery for patients who turned out to have nothing wrong.

Subsequent ultrasounds in my case revealed that the mass was “growing,” and this had me freaking.

The gynecologist told me that a follicular cyst will start shrinking, and that’s what we were looking for. So why was this thing getting bigger?

The doctor explained that if it was a follicular cyst, it had not yet reached its maximum size, but once it does, it will start shrinking.

He also held onto the possibility that it was dermoid in nature, which is much denser than the follicular.

I should have realized at the time that a tumor doesn’t grow as fast (in terms of millimeter measurements) as this “cyst” was growing. But I wasn’t thinking that way.

All I knew was that they couldn’t rule out ovarian cancer, but that it was most likely an ovarian cyst, and I had to keep having ultrasounds. Finally, the thing started shrinking. And shrinking.

I was cleared and the diagnosis was a follicular cyst. It’s interesting to note that several of these can show up on an ultrasound at the same time, in various stages.