How Dangerous Can a Jugular Bulb Diverticulum Ever Be? 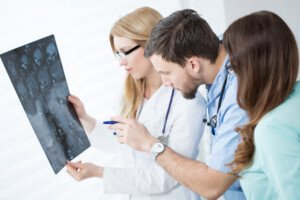 Has a head scan revealed you have a jugular bulb diverticulum?

Can a jugular bulb diverticulum ever be life threatening? How bad can it ever get?

I underwent an MRA (magnetic resonance angiogram) of my head because I had new-onset pulsatile tinnitus in one ear.

A head and neck surgeon, plus a neuroradiologist, reviewed the image a second time – and that’s when the neuroradiologist noticed what could be a jugular bulb diverticulum.

However, the initial MRA report was all clear of anything that could cause the pulsatile tinnitus.

In fact, at my visit to the head and neck surgeon, he showed me on the computer the image of my head and brain, and said it was “beautiful.”

But for some reason, a few weeks later, they decided to take a second look, perhaps inspired by my normal carotid artery ultrasound (carotid artery disease could cause unilateral pulsatile tinnitus).

The MRA report was updated and states:

I was asked by the ordering provider to comment on any potential findings of intracranial hypertension or other potential etiologies for the patient’s tinnitus.

Assessment for intracranial hypertension is somewhat difficult on this exam, but no partially empty sella or obvious optic nerve sheath distention is seen.

There is a questionable small left jugular bulb diverticulum on image 62 of series 2. This is not well evaluated on this MRA. A CTA (pulsatile tinnitus protocol) could be performed to further assess and also assess for other subtle arterial/vascular abnormalities that are not evident on this exam.

Excerpt from my MRI report

I received this message through the health plan’s email system close to 5 pm, so I immediately called the scheduling department.

I scheduled the CT scan (the “A” stands for angiogram) as a pre-emptive move, since these scans book out weeks in advance. But I wanted to at least get it in, in the event I decided to go through with it.

After all, a CT scan emits radiation.

His next available phone slot was a week after the CTA date. I then expressed my concern to the scheduler over wanting to speak to him before the CTA date, because I didn’t want to get radiation exposure if I really didn’t need this scan.

At that point, I had already read up quite a bit on jugular bulb diverticulum, absorbing a lot of information about this uncommon condition of anatomical deviation for which no solid verdict is out as to cause.

With the reading, it didn’t take long for me to realize that there actually was no need for that CT scan, because the pulsatile tinnitus was very subtle, and I didn’t have the other two classic symptoms of a jugular bulb diverticulum: hearing loss and vertigo.

I heard the pulsatile tinnitus only at night, lying in bed, when everything was very quiet, or inside my car, doors shut, in the garage.

I usually had to listen for the PT; that’s how faint it is.

The literature on jugular bulb diverticulum states that it’s not “static,” that it enlarges over time.

But I found nothing much more on the natural course of this condition other than as it gets bigger, it can “erode” (compress) nearby structures.

This would then cause symptoms that can’t be tolerated, such as vertigo, leading to treatment.

Don’t let the term “out-pouching” mislead you; a JBD is not an aneurysm.

Initially, I was anxious because I didn’t know what the worst case scenario was with a jugular bulb diverticulum.

The big three to rule out, when one has unexplained pulsatile tinnitus, are an arterial venous malformation, a dual arterial venous fistula and carotid artery disease (this latter could cause a stroke).

So that next day after scheduling the CTA, the scheduler for the head and neck department said she’d pass my concerns to the doctor’s nurse who’d call me back.

Later that day, the call came: from the doctor himself!

He was perfectly okay with me cancelling the CTA, for the reasons I have already described.

I then said to him, “Correct me if I’m wrong, but the worst case scenario for a jugular bulb diverticulum is a sudden severe vertigo that makes me fall down the staircase.”

He agreed. So where is this situation left at? If my pulsatile tinnitus gets worse, or if I develop vertigo or a sudden hearing loss, then it’s time to schedule the CTA to confirm the JBD.