Venus of Willendorf NOT Proof Obesity Was Once a Beauty Standard 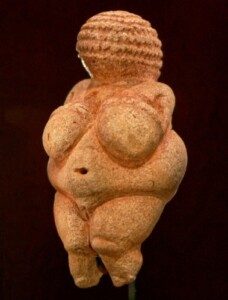 Influencers need to stop using the iconic Venus figurine as “evidence” being fat was once a beauty standard.

Art scholars have debated its meaning for decades. NOBODY KNOWS why this Venus presents with morbid obesity.

Several theories have always floated around as to why this little figurine is built the way it’s built.

A few more theories are in place, but the bottom line is that it’s simply impossible to explain why the Willendorf statue, as well as several other similar ancient carvings, are quite plump and well-endowed.

Influencers who identify as fat activists and who promote fat liberation typically mention the Venus of Willendorf in their narratives.

They do this to convince people that the existence of this statue means that around 25,000 years ago, obesity was a relished and sought-after body type.

However, only a handful of similarly-built figurines have been unearthed.

In total there’ve been about 200 prehistoric “Venus” figurines discovered. And they don’t all look like the Willendorf sculpture.

What the influencers fail to point out (and quite conveniently) are several flaws in the theory that the Venus of Willendorf was carved to celebrate large, very plump bodies.

First of all, she, along with the other Venus sculptures, has no face.

So if her very rotund body is to celebrate a beauty standard during caveman times, then what’s with the faceless head and absence of hair?

Certainly, the artists of these sculptures had the capability to carve out some rudimentary facial features and suggestion of hair.

If you take a look at the carvings, it’s clear that the ability to carve out a face was NOT lacking.

The absence very much appears to be intentional rather than due to lack of a means to do it.

So if the fat activists believe that the Venus was created to celebrate a particular body type, then it’s only fair to go all the way with this premise:

The prehistoric beauty standard included being faceless and hairless.

And footless. The figurines also lack feet. One theory states that the figurines were self-portraits, and that the lack of faces was due to lack of mirrors.

But this theory doesn’t hold up too well when we consider that the artist could’ve looked at her reflection in a puddle, or, could’ve simply carved out a face by viewing the faces of other women.

In fact, as an illustrator myself, I don’t need to look in a mirror or at any other woman’s face in order to draw one.

A sculptor, then, would not need to view their own face or anyone else’s in order to simply make a face out of limestone.

And nobody needs a mirror or puddle reflection to carve out some hair.

The next loophole in the obesity beauty standard theory is that the Venus of Willendorf has thin arms.

They’re so thin that when the art is viewed head-on, it appears armless.

But look closely. The arms are there, resting on the breasts: spindly ones that are unrealistically sized, relative to the rest of the body.

Though some obese women “carry most of their weight” in the middle and upper legs, they still have ample arm girth.

I’ve never seen a woman who’s built like this Venus including the arms! Have YOU?

Why don’t the influencers promote spindly arms while they’re at it? After all, the Venus of Willendorf has pipe-cleaner arms.

The third flaw is the dismissal of other Venus figurines. As mentioned, not all of them look like the Willendorf.

Some actually have unrealistically small waists relative to the size of their lower bodies…a scaled-up version of a Disney princess’s body. 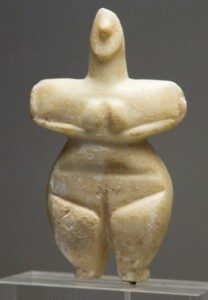 So why, then, don’t these fat acceptance influencers promote small waistlines? After all, some Venus figurines have svelte waists!

While we’re at it, why don’t the influencers promote manly, linebacker-like shoulders? Some Venuses have manly wide shoulders — such as the one above.

Plus, some of these statues look more alien than human — like the one below. 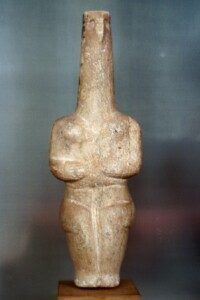 It’s funny how the influencers single out the Willendorf. They’ve consciously chosen a figurine that resembles their body.

Never mind the figurines that look more like Kim Kardashian, Ashley Graham or an Olympic shot-putter.

Most Venuses have been found all over Europe. This spreads their small quantity mighty thin. Thus, the Venus of Willendorf is, essentially, one-of-a-kind.

This all means significant scattering — over geography and time — of what was supposedly a relished body type.

If this body type was enviable, this begs two questions: #1) Why weren’t more created?

Certainly, paleontologists would’ve dug up way more if way more had been made, and #2) Where are the male versions of these Venuses?

Where are the 20,000-year-old stone carvings of men who have bodies like Santa Claus?

Yet some body image influencers keep presenting the Venus as some kind of proof that obesity was once a beauty standard.

As for obesity allegedly being an envied body type in the 19th and 18th centuries among people suffering from food shortages and poverty — let’s not get confused here. They wanted money, not fat.