If I’m Autistic How Did My Childhood Teachers Miss It? 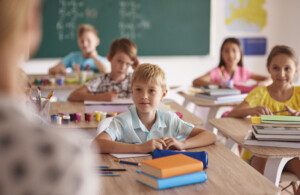 How did I, as well as many other kids, get through elementary, junior high and high school without any teachers spotting the autism?

Just HOW many kids will go off to college with undiagnosed autism? We’ll never know.

My autism is one of the reasons I was never susceptible to doing stupid things in college like getting drunk in the name of being “cool” or impressing other students at a party.

Autism comes with a much higher propensity than what’s seen in neurotypicals for resisting peer pressure and defying joining in on harmful collective thinking.

I’d like to think that autistic people are immune to Borg assimilation!

My autism (clinically diagnosed in spring 2022) went missed by my teachers all throughout primary and secondary school.

Why Teachers Can Miss Autism in a Student

Though I grew up in an era where “autism” meant the image of a little boy biting himself, hitting others, being unable to speak, spinning in circles, staring at lights for prolonged periods, shrieking when touched, seemingly unaware that their parent is right next to them talking to them, etc., it’s still possible that in this day and age, autism can go undetected in a child.

This isn’t to say that the child’s demeanor or conduct won’t stand out somewhat to the teachers.

Of course it will – but the teacher may just pass it off as oddness, quirkiness, braininess, introversion or some other trait that’s still on the bell curve of “normal” behavior.

When I was a child, a teacher’s biggest concerns were the following behaviors in students:

As long as a student didn’t violate any of these rules, the teacher didn’t care if they were the oddest in the class or presented as socially awkward.

In my case, I had a normal gait, normal speech pattern and good eye contact.

My serious demeanor may have been interpreted as obedience, since teachers don’t like when kids fool around in class.

However, in ninth grade, my art teacher had an issue with my serious demeanor. She kept telling me how serious I looked.

What was this neurotypical adult trying to accomplish?

Her comments would put me on the spot. How was I supposed to respond?

As the adult, she should’ve known better and to just leave me alone. Talk about impaired communication skills – this teacher had them!

In grade 11 I switched to a new high school. There was a tenth grade girl, Judi, whom everyone thought was weird. She didn’t give good eye contact. She sat alone in the cafeteria for lunch (or so I heard, being that I always ate my lunch in the main lobby).

Michael was another odd kid; he was in my senior year history class. He seemingly never spoke, had little facial expression and a slightly off gait.

Steve was quirky, brainy and, though he had no friends, he was likeable. Everyone attributed his quirkiness to being very smart.

As I look back, I swear that these kids were autistic – but because they were well-behaved and didn’t cause the issues that the more “normal,” neurotypical students did, teachers would’ve never considered autism.

Or, maybe they did but kept silent because back then, those teachers would’ve anticipated a lot of backlash from the parents and even other teachers.

The Neurotypicals Are the “Bad” Students

Many teachers get flustered or aggravated at kids who misbehave in class and have poor control over them.

If they thought that I was kind of strange, they were okay with that, because I wasn’t a disruption in the classroom. I was never tardy.

When I was called on to read, I read very well. Teachers were more concerned about students who struggled or who had not been following along in the textbook.

I went to a small Catholic elementary school. The nuns and lay-teachers were concerned only about obedience.

If I was usually drawing at my desk during recess, while other kids were socializing, there would’ve been no reason for any teachers to suspect autism. Teachers like quiet kids who stay at their desks.

This isn’t to say I never interacted with classmates. I most certainly did: with the same five. I wasn’t always drawing during recess.

At one point in grade school, three girls and I were – for lack of a better term – talk buddies.

Nevertheless, a teacher observing our chattiness during recess would be yet one more reason never to suspect I was autistic.

In today’s environment, a teacher who knows about mild autism might suspect this in a student who sometimes, not always, stays at their desk during recess, not interacting with others, and instead engaged in something where they’re showing prolific skill.

In high school the geometry teacher would always order us to work in groups. I hated this. She took it as a bad attitude rather than thinking, “Hmmm, could this be autism?”

Times have changed. A child of today who clearly has issues with working in groups might be suspected of having Autism Spectrum Disorder.

An accommodating school will allow that child or teen to work in solitude.

A smart teacher will announce, “That is your assignment. Feel free to get in small groups to work on it, or if you prefer, work by yourself. Doesn’t matter to me; as long as you have the assignment completed for tomorrow.”

Yes, my autism wasn’t the problem. It was the narrow-minded teachers who had the problem.

Had I grown up in today’s environment, attending schools where teachers are better at recognizing subtle signs of autism – and from this an assessment may ensue – I may have been diagnosed in grade school.

However, even with the increased awareness of Autism Spectrum Disorder these days, I’ll bet that many children will go undiagnosed straight into adulthood.

One reason is that autism still carries with it a stigma. It’s considered a “bad” thing to have, a defective hardware rather than an alternative software.

But ever so slowly, autism is gaining acceptance.