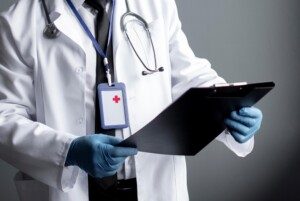 A woman with EDS, MCAS and dysautonomia suffered for years because one doctor after another kept telling her that her severe symptoms were all in her head.

The symptomology for my disease(s) started right from birth.

Although, they mostly disappeared through childhood and started to resurface in my late teens and early 20s.

When I was born, I was told I was allergic to most things. Even at one point, I was reacting poorly to breast milk and baby formula.

They had to find alternative ways to get me nutrition.

As a kid, I was really thin, tall and athletic, but I was also extremely clumsy.

My mother used to call me “Grace” and would say, “You are the only person I know who falls up a flight of stairs.”

She was right, I could trip over thin air.

Shifting Symptoms in My Teens

Once in my teens, things started to shift, and symptoms of my disorders started to re-manifest.

I remember feeling like my throat was closing, having numerous panic attacks, having dizzy spells when standing up, breaking out in hives from head to toe, and having issues with food.

By the time I was 19, I had such severe symptoms that I started to seek out doctors who automatically pinned my symptoms with the label of “anxiety and panic attacks.”

In various office visits to various types of doctors, I had been honest about my childhood upbringing which was less than nurturing and safe, which I felt impacted my health long-term.

It had been filled with violence, chaos and turmoil.

It felt right to share, but being transparent just created a scapegoat for many doctors who continued to blame all my physical health issues on mental health issues resulting from child abuse and would not take me seriously.

At one point I had doctors so annoyed at me that they told me never to come back to their office.

I also had a therapist telling me I was mentally stable overall, and just needed some support for my panic and anxiety, yet nothing worked. It was so confusing.

My family and friends started to question my sanity. I could feel the annoyance that came with being around me or in a relationship with me.

It destroyed many of my relationships and left me swimming out in a tumultuous ocean with no life vest. I could get no one to listen to me.

It all hit me and everything came crashing down.

In 2001, I moved to a new city and state, trying to get free from my past childhood and current health issues.

I thought that perhaps moving and getting away from everything I knew would fix everything.

Shortly after I moved, the World Trade Center attacks happened. I lost my job and kept getting sicker and sicker until I could not work.

I was almost blacking out, suffering from tachycardia, breathing issues, hives, and my throat would close.

I would feel like I was going to die. The hives got so bad they started to scar my skin, and I could barely sleep.

At this point, I was recommended to take a beta blocker to calm down my heart rate in hopes that would also calm my nerves, since all I had was anxiety — according to every doctor I had ever seen.

So Many Doctors, So Little Time

I was bouncing back and forth between gastroenterologists, cardiologists and allergy doctors.

At times, other symptoms would come up, and I would be sent to other specialists like neurologists, dermatologists and endocrinologists.

Over those years I was diagnosed with a hiatal hernia, GERD, vocal cord dysfunction (VCD), PTSD and eosinophilic esophagitis, and had to have my throat stretched.

I visited the emergency room so often that doctors would visually roll their eyes after they looked at my growing medical records, and it only pointed to a neurotic woman with anxiety.

You Must Get Deathly Thin Before They Can Help You

In the darkest part of my disease progression, I could barely eat any food. Everything I ate made me violently sick.

So I would starve myself until I had to eat. Then I would stand in front of the refrigerator and cry, knowing I had to eat something or I was going to die. Yet, anything I ate made me feel like I was dying.

I was drastically underweight and malnourished. I tried to get help, and the doctors told me that they would not support me with a medical feeding tube unless I hit 110 lbs.

I could only eat potatoes and broccoli boiled with oil. When I told the doctors that, they told me to eat more oil.

Finally worn down, I signed myself into the local hospital’s psychiatric ward with no option to leave unless they said so. I was terrified but I was willing to accept that perhaps I was crazy.

Shortly after they let me out and I tried two in-patient treatment centers for PTSD in Chicago and Kansas City. Nothing helped.

Feeding Tube Formula; A Surgery I Did Not Want

While I was in the hospital waiting to start the surgery, the gastroenterologist was yelling at me to get into an eating disorder facility.

When he left the room, I asked the nurse and dietician if I needed a tube in my body to have the formula or if I could drink it.

They told me I could drink it, but the doctor told them I refused to do so.

I saved myself from an unneeded surgery and walked out with a prescription for the feeding tube formula.

Once I drank it, in a month I gained 10 lbs and started to feel somewhat better due to being so malnourished for so long.

In 2016, I moved to Oregon for a fresh start and to find more progressive doctors. Yet, after seeing a handful of doctors I still came upon the same dead ends.

However, a friend of mine from Canada with whom I had bonded over similar symptoms messaged me, saying she had a diagnosis of MCAS (mast cell activation syndrome).

With the syndrome fitting most of my symptoms, I spoke to four allergy doctors who all dismissed me.

I joined an MCAS Facebook group and found a doctor who specialized in MCAS. I was diagnosed on my first visit.

They offered me medication but told me since I have such severe allergic reactions to everything, that the treatment could make me worse. I decided not to take the treatment then.

In 2018, a year after my diagnosis my body took a nosedive.

After two months of severe regular life-threatening symptoms and doing everything I could to avoid the ER, I could not take it anymore. I wanted to die.

When I signed in and told them that I had MCAS. It was the first time anyone listened to me and actually knew what I was talking about.

I was willing to risk taking the medication now because nothing could get worse than how I was feeling. I fell asleep.

The Trifecta of Disorders

Although things have gotten quite a lot better for me. I had gained stability and weight, and felt my nervous system was more at ease more often. I knew there was more to the story.

It is common for people with MCAS to also have POTS (post-orthostatic tachycardia) and EDS (Ehlers-Danlos syndrome).

It had come to my attention that my tachycardia, temperature regulation issues and lack of fluctuating blood pressure were probably POTS as well as other things that pointed to EDS.

When I asked my doctor about the possibility of Ehlers Danlos syndrome, my doctor sent me to a rheumatologist.

The rheumatologist called me before my appointment and told me that they didn’t deal with EDS.

I got a name for a doctor in Portland, one of the only ones who dealt with EDS.

When I called, they had a six-year wait, and I was told “good luck.” It sounded very morbid to me.

Again, back at the Facebook group, I found a geneticist located in Bend, Oregon who was able to see me within a couple of weeks.

We had a three-and-a-half-hour meeting, and by the end of my appointment, I had my formal diagnosis of EDS and dysautonomia.

For the next two weeks, I continued to connect all the dots.

For example, I purchased some braces for my knees, and when I put them on while I was standing in my living room, I started to cry because it was the first time I understood what real stability meant.

I have been wearing tall boots since I was in high school, and I didn’t realize I was wearing them to stabilize my ankles.

There was so much in my life that was shocking to me and so many symptoms that I had been living with or masking based on thinking that they were normal and that everybody had to deal with the same thing.

Getting a diagnosis of EDS, dysautonomia, POTS, MCAS and PTSD has changed my life.

If you are still struggling to find answers, I ask you to hold on and believe in yourself even if NO ONE else believes you.