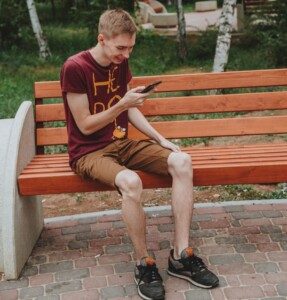 What if he eats 3,000 calories a day? What if most of his diet is healthful food?

When someone sees a man who’s very thin, such as 150 pounds on a six foot, two inch frame, they’re often inclined to believe he’s “too skinny.”

This mode of thinking or assumption will be based on several variables. For instance, it’s not so likely to come up if this man is part of a group of men who are about to begin a 5,000 meter run for the Olympic trials.

But if a man with these metrics is auditioning for a men’s swimsuit calendar, the decision makers will surely think, “He’s WAY too thin.”

This thought process may also occur if the man is seen in a gym’s free-weight area, barely bench pressing 95 pounds.

But what about “too thin” in terms of health?

We don’t know if that guy is a marathon runner or competitive high jumper – two sports in which elite competitors are usually quite thin.

He may also be a nonsmoker and nondrinker who eats mostly whole food including plenty of vegetables and fruits.

So overall, the question becomes, IS 150 pounds not enough weight for a man of 6’2?

“No, this is not too thin at all,” begins Jeffrey S. Gold, MD, board certified family physician and owner of Gold Direct Care in Salem, MA.

The weight of 150 pounds on a 6’2 frame is not comprised of the exact same ratio of tissue from one man to the next. There is muscle, and there is fat. Weight and height need to have some context, and BMI alone does not provide that.

“Now, this does not take muscle mass vs. fat into consideration, so it does not necessarily mean the man is ‘healthy,’ as he could be more on the ‘skinny fat’ side with normal appearance – but [have] internal metabolic dysfunction — depending on exercise habits, dietary habits and genetics,” says Dr. Gold.

The man may be naturally thin with a very fast metabolism who’s eating three healthful meals a day and healthful snacks, while abstaining from smoking and drinking.

He may be a runner, a hiker, a rock climber or a cyclist, and/or, he could also be doing strength training with some yoga tossed in. He’s a healthy fit guy.

Is he the first choice to be the lead man in a tug-of-war contest? No. Is he the guy you want lying on top of a crocodile to contain it while its mouth is being bound shut? No. Is he the man you want as your bodyguard while on your undercover assignment? No — unless he’s prolific in the martial arts.

But these factors don’t mean he’s not healthy and on course for a long life.

Should he gain more fat? Not necessarily. Should he put on a little more muscle? Yes, unless he wants to excel in long-distance running or the high jump.

At 150 pounds and 6’2, he probably could stand to gain more muscle. The reason is not aesthetics. It’s about bone density.

Weight-bearing exercise toughens up bones. If this man gained 10 pounds of muscle, his bones would be accordingly more dense. At 170 – which is 20 pounds of added muscle – he’d still have a lean look. But he’d have even stronger bones.

Men are not immune to osteoporosis – when bones become fragile and porous in old age, even middle age, and thus prone to fractures.

If a man of this height weighs only 150 — but he’s undereating — this can mean he’s unhealthy in that his body isn’t getting enough nutrient support.

This could impact his ability to recover from COVID-19, the flu or some other illness.

It could also mean a higher risk of sickness if he’s in the heat for a long time without adequate water intake.

The reason he’s not eating much needs to be explored, as this could be caused by a mental health issue or a systemic disease.