Can Untreated Sleep Apnea Cause a Daytime Rapid Pulse? 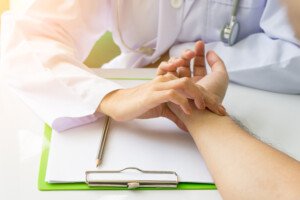 Is your resting heart rate fast but you can’t figure out why? You might be wondering if a fast pulse might be caused by untreated sleep apnea.

This is a logical thought process if you don’t have any of the other risks for an elevated resting heart rate such as smoking, persistent anxiety, workout burnout, medications and overactive thyroid.

Obstructive sleep apnea, when not treated (CPAP therapy is the gold standard), is dangerous to the cardiovascular system.

“There is some evidence that OSA may cause an increase in resting heart rate, though the context of this is a study by Pamidi et al2 which proved that optimal CPAP treatment reduced daytime resting heart rate in those with prediabetes,” says Dr. Praveen Bhatia, MBBS, a respiratory physician with an interest in sleep medicine, and clinical advisor to MedCourse, which connects clinicians with medical course providers.

“This means that, to my knowledge, we don’t have direct evidence that untreated OSA causes increased resting heart rate in all of those with the condition, but suggests that there may be a link.

“These arrhythmias cause a rapid pulse when triggered (and in the case of ectopics could raise baseline heart rate), but usually cause ‘episodes’ of fast heart rate rather than a rise in the baseline daytime pulse rate.”

Patients often describe arrhythmias as a “thumping,” “fluttering,” a “skipped beat” or “irregular beats.” These are episodic.

But what about that baseline pulse, which may actually be quite steady and regular – but just persistently elevated, even when you’re calm? This is probably not caused by OSA.

A normal resting heart rate is between 60 and 100 beats per minute. If it’s persistently in the 90s, this may seem normal, since this is below 100, but you’ll want to mention this to your doctor anyways, as it can be caused by adverse issues such as stress and too much caffeine.

If you’re experiencing what you might call episodes of irregular beats, these may or may not be harmless.

You’ll need to discuss these with your physician (especially if accompanied by chest pain or lightheadedness). Untreated sleep apnea can disrupt heartbeat.

“This is linked to intermittent hypoxia, as well as recurrent awakenings and large swings in the pressure inside the chest during apnea episodes,” says Dr. Bhatia.

“These lead to increased systemic inflammation and activation of the sympathetic nervous system (as chemicals called catecholamines are released), both of which cause remodeling of the heart tissue — which increases the risk of cardiac arrhythmias.”

Intermittent hypoxia simply means a shortage of oxygen that comes and goes. When this occurs night after night, the adverse cumulative effects really add up.

As for those “awakenings,” this doesn’t necessarily mean at the conscious level.

The brain, detecting a shortage of oxygen in the blood from the apnea events, semi-wakes the sleeper – just enough for the collapsed tissue in their throat to firm up and open the airway, which then reflexively leads to a deep breath.

This can occur hundreds of times overnight without the sleeper being aware.

Dr. Bhatia explains, “Treatment of OSA with CPAP reduces the likelihood of intermittent hypoxia and recurrent arousals, so reduces the risk of further changes to the heart tissue.3″