Worried that an Online Test Said You Could Be Autistic? 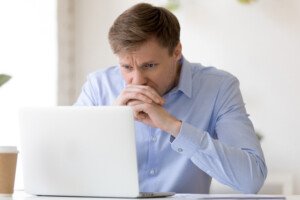 Did you get a result from an autism questionnaire that indicates “autistic traits” or a suspicion for autism? Worried?

There’s a reason you answered the questionnaire in the first place. The reason is that for some time, you’ve suspected you might be “on the spectrum.”

• All you life you’ve felt out of place.

• You’ve never been able to figure people out, and/or, they were always puzzled by your thought processes.

• You’ve sometimes wondered if maybe you were an alien from another planet, sent here to observe humans.

• No matter how hard you ever tried, you couldn’t fit in.

• People who seemed to like you would suddenly want nothing to do with you.

• You could never naturally engage in “small talk” and preferred to discuss intriguing concepts and ideas that nobody else wanted to talk about.

• You’ve been accused of being rude when you had no idea how.

You may, indeed, be on the Spectrum. But if an online test suggests this, there is nothing to be worried about.

You should see this for what it is and not complicate it. The test merely suggests that your lifelong experiences have a name.

An online test for autism (or Asperger’s syndrome, which in the U.S. was replaced by “autism spectrum disorder” in 2013) may yield a result that – for the first time in your life – explains everything about you.

I was diagnosed with Level 1 Autism Spectrum Disorder in the spring of 2022.

Prior to that I took numerous online quizzes or tests. They all scored high enough for a suspicion of autism. This didn’t worry me. Instead, it relieved me.

The reason I didn’t get uptight or worried upon seeing high scores (not super high, but high enough to be within striking range of ASD) was because I was finally seeing a legitimate explanation for my lifelong experiences.

You see, I was either autistic – or a very screwed-up, failed neurotypical.

Well, I’d rather be autistic than be a defective NT with some unspecified flaw.

But don’t get me wrong here: By NO means am I implying that autism is a defect in brain wiring.

The majority of people are “neurotypical.” But … majority doesn’t mean normal.

In a world 20 lightyears from Earth might be a planet where the majority of people are mildly autistic.

The small percentage of neurotypicals there would forever be struggling to fit in, and the majority (autistics) would view them as quite weird, strange, inept and cognitively challenged – and in some cases, even disabled.

Online Tests Do Not Diagnose

It’s important to realize that an online test is just a guideline and a recommendation for further evaluation.

If you scored high, this does NOT automatically mean you’re on the Spectrum – especially if you rushed through the questions or were distracted during the test by hunger, noise outside, your dog, etc.

You may want to take the test again at a later date when you’re relaxed, well-fed, thirst quenched, not in a hurry, and know with absolute certainty that you will not be interrupted by anything.

If the second test result is similar or even higher, there’s still nothing to fret about.

If your test result hints at ASD, this should not change anything for the worse!

If anything, it should shed some light and wisdom upon you, as it would explain why you’ve always “felt different” or couldn’t connect with people, or exhibited other atypical traits.

When I was growing up, the term “on the spectrum” wasn’t used. A person was either autistic or not. There was no in-between, no variation.

Thus, back in that day, when people heard “autistic,” they pictured a boy sitting in a corner flapping his hand before his face for hours.

They imagined an adult who barely spoke and was not able to hold down even a simple job.

They envisioned a person who couldn’t give affection and stiffened up when their own parent hugged them.

The stereotype included people who never experienced joy or happiness, who never smiled, who sounded like robots when speaking.

At some point, it was realized by the American Psychiatric Association that autism comes in many shapes and flavors (the spectrum), and that many autistic children and adults have a mild or high-functioning form.

Autistic men and women are everywhere.

An Issue of Incidence in the Population

About 2.2% of the American population has ASD. This includes severe. This figure also suggests that over 97% of people are neurotypical.

Keep in mind that many people with ASD have not been diagnosed, and many aren’t diagnosed until well into adulthood.

Now suppose the percentages were flipped: Let’s say only 5% of people were neurotypical and 95% were on the high end of the Spectrum.

In this hypothetical society — whom do you think would be considered the “oddballs” or “different”?

What we now consider the neurotypicals would be the “weird ones” in this intriguing thought experiment.

THEY’D be the ones struggling to fit in and straining to conceal the features that are the opposite of what we know as neurodivergent.

• They’d try to be more blunt.

• They’d have to keep reminding themselves to engage in repetitive behaviors such as foot tapping, leg bouncing, hand flapping, body rocking or swaying, or tapping their fingertips together to appear more like all the people around them doing these things.

• They’d have to remember to look more at a person’s nose and less at their eyes when in conversation.

The reality is, however, that the neurotypicals vastly outnumber those on the Spectrum.

This doesn’t mean there’s anything wrong with you should an official diagnosis turn up autism spectrum disorder.

Don’t let the word “disorder” unsettle you. That’s simply currently the name given.

For all we know, in a few years the American Psychiatric Association will update the name to Autism Spectrum Neurotype. After all, autism is a neurotype.

If, indeed, there comes a day when a clinical psychologist informs you that your evaluation results show autism, and at that moment, you feel downtrodden, just tell yourself THIS:

At that very moment, someone out there was told they had only six to nine months to live or would never walk again from their car accident. Dust yourself off and embrace the art of keeping things in perspective.

Lorra Garrick has been covering medical, fitness and cybersecurity topics for many years, having written thousands of articles for print magazines and websites, including as a ghostwriter. She’s also a former ACE-certified personal trainer. In spring 2022 she received a diagnosis of Level 1 Autism Spectrum Disorder.