Do Neurotypical Kids Ever Hand Flap As a Stimming Behavior? 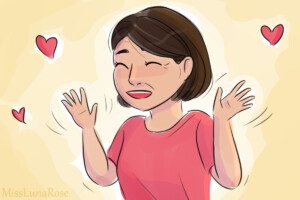 Some parents are worried their grade school child could be autistic because they flap their hands. But can hand flapping be normal in this age group?

A child of grade school age may excitedly flap their hands for a few seconds when you tell them, “We’re going to the beach!” or, “The ice cream truck’s down the street; here’s some money – get what you want!”

These are transient moments of hand flapping – in response to great news.

Adults, even, have been known to flap their hands while joyfully excited, such as when winning something on a game show.

I’ve seen it on “The Price Is Right” when someone comes running up on stage after guessing the closest price during bidding.

Flapping can also be done out of nervousness, such as right before getting into the seat of a roller coaster or preparing to dive off a high board for the first time.

But what about stimming (self-stimulating or self-regulating behavior)? Hand flapping for this purpose is entirely different than from momentary excitement or trepidation.

When hand flapping is done as a stim by an autistic child, it may or may not be prolonged. But it’s the prolonged version that can get more attention by the parent.

Sustained flapping of the hands may have a steadiness or rhythm rather than being erratic.

Hand flapping in autism may also last only seconds. If your child flaps his hands for three seconds after every ball he throws when bowling, or flaps for no apparent reason before taking his seat after his turn, this could be a stimming behavior driven by autism.

However, neurotypical kids may flap their hands after getting a strike.

One might say that human hands were made to flap. Adults shake them out when their wrists and forearms become fatigued after lifting weights or some other activity that involves intense hand movement.

Neurotypical kids (and adults) may unknowingly flap their hands as a self-regulating behavior – but with a caveat: using an implement. For instance:

Using a ball goes unnoticed because balls are meant to be bounced or tossed.

But when there’s no ball — this gets attention because the flapping isn’t serving a mechanical purpose.

Hand flapping as a stimming behavior in neurotypical children?

If your child flaps his hands in the absence of momentary excitement or transient distress, and especially if the motion is sustained for minutes at a time, you’ll want to check for other signs of possible Autism Spectrum Disorder.

“Hand flapping certainly can occur in older children, but there does not seem to be the same self-regulation component as with autistic children,” says Dr. Jessica Myszak, licensed psychologist, and director of The Help and Healing Center, whose practice is mostly autism assessment for adults.

“Whether [with neurotypical kids] it is due to boredom, fidgeting or an intentional attempt to distract themselves, it does not seem to serve the same purpose as a release of pressure in the way it does with autistic children.

“Hand flapping can look very similar in both autistic and neurotypical children.

“For both groups of children, flapping can happen when a child is feeling a strong emotion, such as being very excited or extremely upset.

“While for autistic children, hand flapping helps with self-regulation and calming themselves down, this is not usually true for neurotypical children.”

If your child flaps his or her hands in a way that appears to be stimming (or to put another way, for no reason apparent to an observer), this needs to be put into context.

No child is ever diagnosed with autism based on only hand motions. And the absence of peculiar hand movements never rules out autism.

Other Signs that May Indicate Autism in Your “High Functioning” Child

• Shows no to little interest in playing with other kids.

• Shows more interest in objects, toys or solitary games than in hanging around classmates.

• Takes things too seriously; rarely laughs, if ever, among other children.

• Displays a matter-of-fact demeanor in circumstances that bring emotion out in other kids.

• Has odd or unusual interests or collects objects that kids normally don’t collect.

• Doesn’t get invited to birthday parties or sleepovers; doesn’t get visits or calls by classmates.

• Has sensitivities to some sounds or lights that other kids don’t seem to have.

• Has a vocabulary or way of explaining things that’s “older” than their age.

• Prefers routine and predictability; doesn’t take well to unexpected change in routine, though this response wouldn’t necessarily be dramatic. It may manifest as griping.

• Says things that are rude or not appropriate without realizing it (a neurotypical child may also do this, but in autism, it would be more frequent).