Can Obesity Cause Vaginal Bleeding? Beware of Misdiagnosis 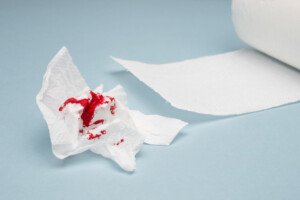 Are you very overweight, postmenopausal and having vaginal bleeding? Have doctors said you should just lose weight or that it’s stress?

Do you also have pelvic pain?

Laura Fraser believes that her sister’s fatal illness may have been diagnosed sooner “if doctors could have seen beyond her weight.”

Her sister, Jan, had vaginal bleeding. This wasn’t menstruation because she was postmenopausal.

She also had unexplained weight loss and ongoing pelvic pain.

Laura reports that Jan’s new OBGYN had not taken these symptoms seriously and performed only a routine exam.

Instead of getting a second opinion, Jan, 59, “explored possible causes of her abdominal pain [googling], wasting months avoiding dairy and gluten and taking over-the-counter pain medications,” writes Laura on statnews.com.

Laura encouraged Jan to get a second opinion. After a two month delay, she got an appointment at an internist’s office; a physician’s assistant saw her. By then, Jan was in a lot of pain.

Laura reports that Jan told her that the P.A. thought her pain complaints were an attempt to get opioids. However, the P.A. ordered blood tests.

The next morning the internist, who had never seen Jan, called and urged her to go to the ER (her blood revealed “sky-high calcium”).

An MRI showed an “enormous mass in her abdomen.” Jan had an endometrial tumor “the size of a volleyball.”

The endometrial cancer had already spread to her bladder, pelvis and lungs. Six months later, she was dead.

Laura wonders if Jan would’ve had a better chance at long-term survival had the OBGYN taken her complaints seriously.

It’s mystifying why Jan, with her googling, didn’t find warnings that in postmenopausal women, vaginal bleeding is highly suspicious for endometrial or uterine cancer.

Or maybe she had found them, but believed that her obesity was somehow causing the vaginal bleeding.

Obesity and Vaginal Bleeding in Postmenopause

“Even a premenopausal woman with these symptoms and who is obese also needs the same.

“I actually found a precancerous condition in a woman who was morbidly obese, but only 40 years old and had not had a period for one year.

“I immediately suspected that her uterine lining had become thickened under the conditions of excess estrogen that obese people have.

“In fat, there is an enzyme that converts an androgen called androstenedione into a weak estrogen.

“Estrogen causes the lining to build up and makes it thicker.

“During this buildup, the lining may not shed at all until it is very thick.

“Once it starts to bleed, it can be very heavy and irregular.

“Obesity is a risk factor for almost any cancer.”

So though obesity doesn’t directly cause uterine or endometrial cancer, it’s a significant risk factor.

If you’re postmenopausal and have a new-onset bleeding that seems to be coming through your vagina, do NOT delay seeing an OBGYN.

Postmenopausal vaginal bleeding, or unexplained premenopausal bleeding, is particularly worrisome in obese women – even if there is no family history of reproductive cancer.

Additional symptoms such as pelvic or lower abdominal pain, new back pain or unintentional weight loss paint an even more concerning picture.

Afraid of Being “Fat Shamed” by a Doctor

When caught very early, uterine and endometrial cancer have an excellent prognosis.

Rather than set your mind to the fat shaming dial, tune it to the concept of ruling out cancer and then working backwards from there.

If your OBGYN doesn’t say anything about ordering an endometrial biopsy and transvaginal ultrasound, either insist on them (remember, work backwards from cancer) or immediately seek out a different OBGYN.

After all, losing weight does not cure uterine, vulvar, vaginal or cervical cancer.