Endometrial Biopsy for Pelvic Pain but No Bleeding? 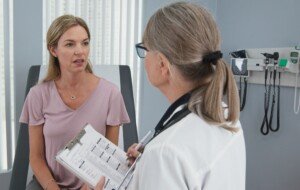 A gynecologist provides information about pelvic pain and the endometrial biopsy.

Have you been experiencing unexplained pelvic pain and worrying that it might be uterine cancer?

“Pain is not a presenting symptom in most cases of uterine cancer; abnormal bleeding is,” says Alyssa Dweck, MD, a full-time practicing OB/GYN at the Mount Kisco Medical Group in Westchester County, NY, and co-author of the book, V is for Vagina.

An endometrial biopsy can reveal the presence of cancer in the uterus.

A woman with pelvic pain (and no other symptoms), who’s fearing uterine cancer, might reason that she should undergo a an endometrial biopsy.

Then, as she figures, if it’s negative, she could breathe easily and her doctor could focus on other causes of her symptom.

But it doesn’t work that way. It’s a fair question to ask why, since if a woman DOES have uterine (endometrial) cancer, it would make sense to find out as soon as possible, rather than spending time on other tests (e.g., ultrasound) that aren’t proficient at cancer detection—and meanwhile the uterine cancer grows.

“It is always a risk benefit game when considering an invasive procedure,” begins Dr. Dweck.

“Endometrial biopsy is typically quick and easy [for the physician, but many patients report it’s painful], but still carries with it risk of infection, bleeding and perforation of the uterus. In fact, I have seen bowel injury from this in a rare instance.”

Pelvic Pain Has Many Causes

Dr. Dweck says that the appropriate indication for an endo biopsy is paramount. “Most physicians will look for the obvious causes of pathology first and go with statistical likelihood.”

A young premenopausal woman complaining of pelvic pain vs. a 60-year-old postmenopausal woman reporting this same symptom will not generate the same ideas in a gynecologist as far as how to approach the situation.

“The vast majority of those with pelvic pain in the absence of bleeding or uterine irregularity on ultrasound will have a normal endometrial biopsy.”

A woman with only pelvic pain may still want that endometrial biopsy for peace of mind, but her doctor likely will not offer this as a first-line test, says Dr. Dweck.

Pelvic pain not only has many possible causes, but can present with varying sensations.

For example, the pelvic “pain” of uterine cancer (which remember, is not a typical symptom of this disease) would feel different than the pelvic distress of the following, which would also all differ from each other: colitis, gas, strained low ab muscles, diverticulitis, food poisoning, celiac disease.

practices general gynecology and is proficient in laparoscopic and robotic gynecologic surgery. Her special interests are female sexual health and dysfunction.