Can an Intelligence Test for a Preschooler Be Accurate? 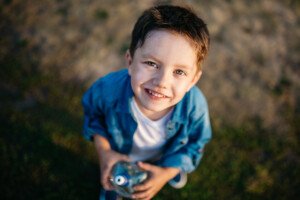 Does your preschooler seem “slow,” yet the test for intelligence was normal?

A speech delay can indicate below-normal intelligence, but so can other aspects of behavior — namely, how the child seems to reason, figure things out or process things going on in the environment.

However, a preschooler who’s still not speaking complete sentences may otherwise seem very bright: “A smart kid who isn’t talking much yet.”

But again, a speech-delayed preschooler may very well come across as slow-witted in general.

This is when parents can become very worried that the issue goes beyond a speech delay; that it’s an issue of a low I.Q.

The problem is that the younger a child, the more difficult it is to determine that their intelligence is only mildly impaired.

Certainly, a more severe cognitive impairment would be quite obvious.

Parents may feel elated when the intelligence test for their preschool child comes back “normal.”

But as the child gets a little older, the parents then revert back to a very concerned state, since speech continues to be delayed, and their little boy or girl seems slow-witted across the board.

One then has to wonder how reliable intelligence tests for kids ages three and four truly are.

“I.Q. testing is unreliable when administered in young children,” says Dr. Tiff Jumaily, MD, a board certified pediatrician with Integrative Pediatrics and Medicine.

“The best age for I.Q. testing is in children between about seven and 12 years old.

“Any younger, and you might just be picking up signs of precocious intelligence, rather than giftedness.”

An example of precocious intelligence might be that of identifying an assortment of colors by pointing to them when the parent names them.

This can create the illusion of all-around smarts. But this same child may only be able to indicate left and right, and not up and down, despite the parent’s attempt to teach the latter.

The child may be good at fetching named objects such as shoes, a toy, a sibling and even consistent at indicating a need for a bowel movement – yet during other instances may be displaying signs of cognition or reasoning more appropriate for a two-year-old.

“Scores can be biased by prior life experiences or familiarity of the language of the test.”

An example is the I.Q. test below. A child of three or four with a mild mental handicap, but who lives on a farm, might immediately choose the correct answer. 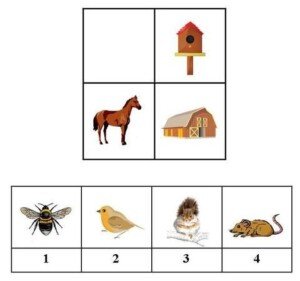 A preschool child with above average intelligence, but who’s lived in a bustling city all his life, may choose a wrong answer.

“In young children especially, the test results can be influenced by the skill of the administrator and the child’s comfort or distrust in the situation.

“Studies have shown that the best predictor of intelligence is the home environment.

“There are a variety of I.Q. tests available.

“One of the most commonly used is the Wechsler Intelligence Scales [e.g., fourth edition of Wechsler Preschool and Primary Scale of Intelligence (WPPSI-IV)].

“In this test, there are subsets testing for verbal comprehension, visual spatial, fluid reasoning, working memory and processing speed.

“Depending on the age of the child tested, these areas will have different types of questions or puzzles to solve.”

When in doubt, parents can always get a second opinion close to the time of a test result that seems to be a false negative for normal intelligence.

They can also wait six months and have the test repeated, or request a different testing format.