What Makes a Man Urinate in Cups or Bottles? 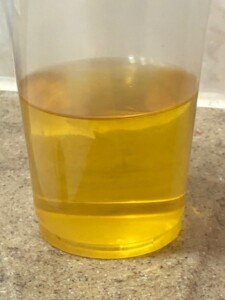 Do you have a roommate or husband who regularly pees in cups or bottles, and worse yet, lets them accumulate?

Is this laziness or mental illness?

A distinction needs to be made between those who urinate in containers and then soon empty them, and those who let the containers accumulate.

If the containers are emptied in a prompt fashion, nobody else in the household will find out.

If they are left to accumulate, then this is how a household member finds out.

Not surprisingly, the bedroom was a pigsty, with piles of dirty clothes and used food containers, bowls, glasses and utensils strewn about.

It’s tempting to pass this off as laziness, but what if, as this OP had mentioned in the thread, the bathroom is only five feet from the culprit’s bedroom?

My former neighbor would pee in plastic cups and leave them around the condo he was renting.

I learned this from a cop whom I called to check on this man because a deathly odor began emanating from his unit.

The police officer told me that the man explained he had to urinate in cups because his roommate was always in the bathroom.

First off, this doesn’t explain why the cups of urine were left to accumulate.

Secondly, I know for a fact that the roommate spent a LOT of time in his bedroom, because I’d frequently hear him yelling at the TV. I’d also hear him falling (he was physically disabled).

So why was the man peeing in cups AND leaving them around the home?

Logical Reasons for Peeing in Cups or Bottles

I’ll admit, I was doing this in the middle of the night because I was scared to venture to the bathroom.

I was staying with my parents to oversee care of their dog (whom I loved dearly) that had a brain tumor.

My mother, elderly at the time, was not able to conduct the alternative treatments or fully handle other management of the situation. My father, though he cherished the dog, remained disconnected throughout this time.

The brain tumor caused seizures. There was something about the idea of this wonderful dog seizing in the middle of the night that scared the shit out of me.

I feared that if I ventured out of the guest bedroom (where I wouldn’t be able to hear the dog thrashing about), it’d be at the exact moment he was having a seizure – which I’d easily hear once outside the bedroom.

Not wanting to risk this chance, I did my overnight peeing in a plastic cup in the bedroom.

Come morning, with the comfort of daylight and the aroma of coffee brewing and my parents’ voices, I’d exit the room and dump the urine in the toilet.

The following comments (by 10 different people and NOT corrected for spelling or typos) were in the thread about men peeing in cups or bottles.

#1      When i lived at home with my Mother and step father back when I was in my late teens early 20’s, my bedroom was my whole life besides work. I smoked weed in that room alot. I was paranoid about opening the door to often as they would smell the marajuana.

Since i hated going out of theroom and seeing them with me stoned, I urinated in my room often. I filled gatorade bottles. At one time I might have 4-5 in a drawer or tucked away due to the lazieness to take them out when the coast was clear.

#2      At the time I was living in a student accommodation facility with communal bathrooms. I sometimes urinated in a bucket because I couldn’t bare the thought of walking to the bathroom (a few doors down the hallway) in case somebody saw me and I had to talk to them.

So I’d hide in my room all day and then empty my wee bucket at 5:00 am when everyone was asleep.

#3      I pee into gatorade bottles sometimes if I am really into an xbox game and don’t want my character to die.

#4      Was a mixture of laziness, anxiety and not wanting people to notice I was drunk.

#5      I do this too and it is just to save time. Except I use 5litre jugs instead of small bottles so I only need to empty it every so often. Why go upstairs to the washroom when I can simply go in my room? Late at night if you are tired, just woke up, busy doing something, watching TV, etc.

It seems foolish that so many people are embarrassed of what others would think and actually waste time going to the washroom.

#6      He says it is so he does not wake me up in the middel of the night if he has to use the bathroom and he continues to do this though I have told him over and over that it is not acceptable.

#7      I have a mental health diagnosis and sometimes I urinate in a bottle instead of going to the bathroom because I don’t feel like being in the presence of other people in my domicile.

#8      Sometimes I don’t want to go out and see people, or wake them up, so I’ll pee in a bottle or cup. But I usually dump it out the next morning.

#9      If I’m working online downstairs in an evening I’ll often pee into a jar or vase which is usually designated for the purpose by my one and only loo is upstairs in the bathroom. Plus it’s a little bit of ‘naughtiness’ I can indulge in without harming firniture or damaging the carpet.

#10      This is something that happens to people that are unhappy with where they live. I have been there myself. You just want to hide in your room, never come out for fear of interaction.

Is someone mentally ill just because they “fear” interaction with people en route to the loo?

Not wanting to interact to encounters with other people is very understandable if the communal bathroom is down a hall in a college dormitory.

Not every college student is okay with being seen in the middle of the night in their PJ’s.

Even during the day, this makes sense (if the bathroom is communal and down the hall) if someone is introverted or uncomfortable around people.

Men with a medical condition that makes it difficult to exit a bed and walk to the toilet will sometimes void in a container — typically a portable urinal (shown below). 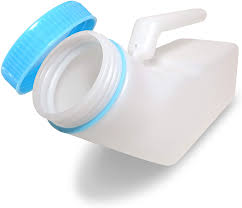 However, they will usually empty it in the morning.

Medical conditions may also prompt use of a bedside commode.

But what’s going on with able-bodied men and women who insist on voiding in cups rather than use a bathroom, especially one that’s on the same floor in the privacy of their home?

The REAL problem is when the urine is allowed to accumulate in multiple containers.

The eight containers that the OP mentions surely go way beyond laziness, especially since the bathroom was five feet from the roommate’s bedroom.

So certainly, when cups or bottles of urine begin accumulating, it’s fair to speculate that a mental health issue is driving this behavior.

“Pissing in bottles” is more common than you may think. Here is a lengthy Reddit thread on this topic.