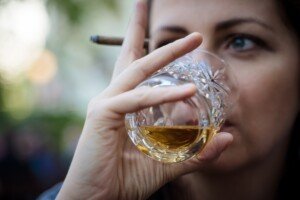 Are you in college and feel pressure to drink and smoke?

Perhaps the pressure is your own stress, or maybe it’s new friends or just the general atmosphere.

“Most people know that smoking and drinking too much alcohol is unhealthy and dangerous, but peer pressure can make people do things they wouldn’t normally do,” says Patricia Celan, MD, a senior psychiatry resident at Dalhousie University in Canada.

“The reason peer pressure is successful is because humans have an evolutionary desire to fit in, and most people want to avoid the risk of being outcast from the group,” continues Dr. Celan.

“Ultimately, that leads to further problems down the line of leading an inauthentic and unfulfilling life.”

Some college students say “No” but still feel pressured to smoke or drink.

There are also circumstances in which, despite how many times one says “No,” they still keep getting offered alcohol.

Thus, the issue goes beyond “Just Say No.” How does one PUT AN END to pushy peers insisting on sharing their vices?

Assertive Alpha-type dormitory residents, party participants or even apartment roommates may be on a mission to turn someone into a drinker.

A thread on an online college forum includes a posting by a college student who says that the polite “no thanks” will have no effect on persistent kids.

And she is right. To get out of drinking at college, and to handle any peer pressure to consume alcohol or smoke, a student’s greatest weapon is HOW he or she declines.

When I was offered alcohol in college, my standard response was “no thanks.”

However…and this is a big however…there was just something about me  —  my bright eyes, my vibes, my intonation  —  that made my brief, simple responses work so well.

The same student never offered me a drink a second time. I may have been asked why I didn’t want to drink. I simply replied, “I don’t like the taste.”

Well gee, how does the persistent drinker argue with that? They can’t, and they know it. It shuts them down without creating any tension.

Nevertheless, there was an instance of a particularly persistent student.

I was in a dorm room, the music loud, and there were a number of kids there, and lots of alcohol.

The “no thanks, I don’t drink,” didn’t work. When Steve kept insisting, I said, “Well, you seem to be enjoying your liquor so much, I’d hate to take any of it away from you. If it’s so good, I don’t understand why you’re so eager to share it instead of have it all to yourself.” Steve got the message at that point.

Clever and Effective Responses to Feeling Pressure to Drink

“I’ve already had my quota for the evening.” (Works only if the person doesn’t know you haven’t been drinking.)

“I have my period and alcohol brings on the cramps.” (Guaranteed to turn a guy pasty white, and a girl will probably say, “Ohh, I understand.”)

The following witty responses to get out of drinking at college are from talk.collegeconfidential.com:

“I’ve got to get up early tomorrow.”

“I have to work on a paper later on.”

“When I drink I turn into the Hulk.”

“I can’t drink tonight because I’m the designated walker.”

“I’m taking calculus and I can’t drink and derive.”

“If you don’t want to drink too much alcohol or smoke, spend some time reflecting on why,” suggests Dr. Celan.

“Once you are confident in your choices and the reasons behind them, it becomes easier to simply say no when peer pressure comes up.

“If the pressure continues, try changing the topic, suggesting a different activity, or choosing a new friend group that allows you to be yourself.”

If you haven’t mastered assertiveness, then carry around a cup/glass of soda that can pass for alcohol.

And remind yourself about the evolutionary desire to fit in. If this consumes you, question yourself why it’s so important to fit in – especially when it seems to be difficult.

If you’re driven to fit in, find a group whom you know probably is liquor- and smoke-free, such as the campus yoga club, strength training club, karate club, etc.

There is no golden rule set by God, Nature or any Powers That Be that a person must belong to some human collective. Be true to yourself! Be YOU!