Why Do Women Accept Rides from Men They Don’t Know? 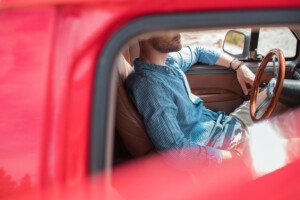 It’s outright mind-blowing: that so many women will accept a ride from a man she’s never seen before, doesn’t know from Adam — a total stranger behind the wheel.

When a woman accepts a ride from a male stranger (in the absence of being stranded, injured, etc.), we cannot assume in most of these cases that she feels she can easily overpower him.

Women of average physical strength often get into the car of a stranger, completely voluntarily, even when her destination is fairly close.

It’s one thing if a woman asks a man for a ride (because she’s late for an appointment and her car’s in the shop, or she’s in high heels and her pre-scheduled ride from a friend just cancelled).

But the picture is entirely different when a man, cruising along in his vehicle in perfect weather, pulls up alongside a woman and offers her a ride!

What’s up his sleeve? Is it cruel for a man to drive past a young able-bodied woman he doesn’t know and not offer her a ride?

Holding a door open for a woman with packages is one thing, but offering a ride to one who’s not struggling?

What compels a woman to get into an enclosed space with a male stranger?

It’s one thing if she must step into an elevator with him to get to the ninth floor. But accepting a ride is a far more elective choice!

“A woman who had early problems with attachment, oftentimes stemming from neglect or abuse, may be non-discriminating, especially toward strangers,” says Dr. Marilyn Benoit, Chief Clinical Officer and SVP of Clinical & Professional Affairs of Devereux. Devereux is one of the largest not-for-profit behavioral healthcare organizations in the U.S., helping children and adults with emotional, developmental, educational and cognitive disabilities since 1912. She is a child/adolescent/adult psychiatrist.

“Individuals who had this poor attachment at a young age may be dangerously disinhibited.”

Other reasons, though, may come to mind as to why a woman would so willingly accept a ride from a man she’s never met.

One is the belief she’d hurt his feelings if she declined.

The feelings of a stranger get ranked higher than the woman’s safety.

I was once in an elevator with a male stranger. He kept commenting that I looked “sick.”

Finally he said, “Let me feel your forehead,” and his hand began reaching towards my forehead.

What the fudge, never mind his feelings! I shot out my hand and grabbed his wrist. The color in his face drained as he jumped back.

I thought I’d share that with you because it goes to this idea of hurting a stranger’s feelings.

Maybe this man meant no harm, but my safety trumps the feelings of a stranger. AND YOURS SHOULD TOO.

The rule is simple: If a man offers you a ride, do not accept it. You may also want to ask yourself why men don’t go around offering male pedestrians rides.