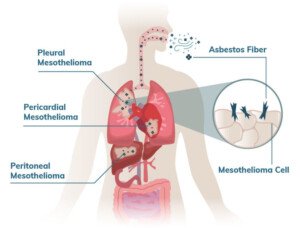 Heather Von St. James was diagnosed with mesothelioma three and a half months after having her baby. She was only 36. She describes her symptoms.

What do you believe was your first symptom?

In hindsight, the first symptom was only gaining five pounds throughout the whole pregnancy, but I was a little overweight to begin with, so the doctor was not concerned.

My baby was growing normally so there really didn’t seem to be cause for concern.

Did you have any other symptom during pregnancy?

I also was really short of breath, but when you’re full of baby, you tend to be breathless.

When did you become concerned?

The first symptoms that signaled something was seriously wrong was mid-October. All of the sudden, it felt like a truck parked on my chest.

I was having a really hard time breathing and just thought I had a bad cold or maybe pneumonia.

Throughout the rest of the month, I got progressively worse. By the end of October, I was so fatigued and had lost almost 45 pounds.

I just thought it was normal postpartum symptoms. I had never had a baby before, so I had no method of comparison.

I knew breastfeeding burned calories, so that explained the weight loss in my mind, and the fatigue was due to going back to work too soon after a C-section.

Plus, Lily was only a month or two old… she was still up every couple of hours to feed. Nothing seemed out of the ordinary.

What kind of physician was the first one you saw for these unexplained issues?

I went to my family doctor, a general practitioner, because the symptoms started to add up to stuff not associated with postpartum. The list of symptoms was getting pretty long.

Fatigue, severe/sudden weight loss, shortness of breath, pale pallor, a dull ache in my shoulder. I was also extremely anemic.

What was your diagnosis and what kind of tests did you undergo?

I was diagnosed with malignant pleural mesothelioma on November 21st, 2005. Just three and a half months after my baby was born.

They initially thought I had a heart virus that many women get postpartum.

Initially, with the anemia, he did think that was what was causing the fatigue and shortness of breath, but after a week of being on an iron supplement, I didn’t feel much better.

So I went back a week later and that is when he ordered a chest X-ray. This is when the idea of the heart virus was first voiced, but the X-ray showed something much more insidious.

I had over a liter of fluid sitting around my left lung, and therefore squeezing my lung to about one-third its normal size.

I was sent to see a pulmonologist to have a procedure called a thoracentesis. They basically stick a catheter into your chest cavity through your back and drain the fluid off.

He noticed that the fluid was an odd color. The fluid should be a straw color, but the fluid he drew off my lung was the color of tea.

I was then sent for a CT scan to find out what was causing the fluid. He thought it was one of two things: a blood clot or a tumor.

It wasn’t until I had a needle biopsy the next day did we know what it was.

I was in shock. I had so many questions, first of which was: “What the heck is mesothelioma?”

I didn’t recognize the word… but my husband knew right away. Then the doctor asked me if I had ever been exposed to asbestos, and that is when it all clicked.

How do you believe you contracted this illness?

My dad had worked construction while I was growing up, and at the beginning, he did a lot of the menial labor such as mixing drywall compound and sanding the walls after it was applied, then cleaning up all the dust. So much dust.

This drywall compound contained asbestos and he brought it home on his clothes.

It was through this exposure that I breathed in the asbestos fibers, leading to my mesothelioma diagnosis 30 years later.

There is a 10 to 50 year latency period from exposure to onset of disease, which is why mesothelioma is so hard to diagnose.

I was 36 upon my diagnosis of mesothelioma. At that time, the Mayo Clinic had only heard of one other patient my age being diagnosed.

What is your advice for anyone who’s experiencing new-onset and worrisom symptoms?

You have to speak up; you have to advocate for yourself and demand answers.

Sadly, many times people are just given things to manage symptoms and never get to the root of what is wrong.

We have so much technology at our fingertips, and the patient voice is stronger than ever.

Don’t be afraid to get a second, third or even fourth opinion until you get your answers.

It’s exhausting doing the work, but waiting for someone to do the digging just prolongs the pain.

So yeah, be your own advocate and find a community that supports you, it makes all the difference in the world.

Heather Von St. James has dedicated her life after surgery to spreading awareness and hope, and has become a tireless advocate at mesothelioma.com for mesothelioma patients, research and banning asbestos.