Can Preschoolers Really Pick Door Locks or Is this Hype?

How is it possible that a preschooler can figure out how to pick a door lock and “escape” without the parent knowing?

There always seems to be news of yet another tragic story of a preschooler who was found dead in the family backyard pool or otherwise went missing and was eventually found dead in a river or never found at all.

In one story about a backyard pool, the preschooler “wandered” outside while the mother slept.

The story generated a lot of comments. Most focused on the following issues:

1     Professional burglars use special tools to get into houses.

2     How is it that preschoolers and especially toddlers are able to get past a door that’s locked from the inside?

How Very Young Children Get Past a Locking Mechanism

• The door lock is within the young child’s reach, and he already knows how to unlock it from watching his parents. The lever is loose enough to be flipped by a preschooler’s hands.

• If the door lock is beyond the child’s reach, the child is able to get a lightweight chair or stool beneath the lock and climb up.

• If the lock requires a key, the preschooler knows where the key is and knows how to use it after observing adults using it.

• The door is unlocked to begin with!

• The door has no alarm that sounds when it dislodges from its frame.

You can clearly see that under these circumstances it’s frightfully easy for even a two-year-old to get “past a locked door.”

A child is not an escape artist if her mother’s purse is in plain view on the kitchen table, and the adventurous four-year-old knows “the key” is inside.

These children are not mini-Houdinis. They are simply finding the weaknesses in a flawed system.

In the case of many pool drowning deaths, there are various points along the way, leading up to the drowning, at which security checks would have prevented the drowning.

• Door lock out of reach of child. No lightweight furniture nearby to use as climbing tools.

• Key’s hiding place not known to child or on parent’s person at all times.

• High-end door alarm that no preschooler is smart enough to deactivate; sounds when door opens.

• Pool covered when not in use.

Once the preschool child is outside, there are numerous possibilities for tragedy, such as:

• Hit by car after wandering away.

• Drowns in their own pool.

• Gets into family car (that’s unlocked) and manages to roll it into the street and gets hit.

• If you had to unlock a gate for the service workers, relock it after they leave.

• Don’t assume spouse turned on the alarm system. Check it after he leaves, even if this means interrupting your sleep.

“The 9/11 Commission cited the main failure of the Administration at the time in regards to preventing the terrorist attack on the World Trade Center was ‘failure of imagination,’” says Robert Siciliano, CEO of Safr.Me.com and an expert in fraud prevention and personal safety.

When the young men who eventually were part of the 9-11 attacks were taking flight simulation training, they showed NO interest in learning how to safely land a plane.

Instructors didn’t imagine hard enough what this might mean, because nobody took proactive action about this highly suspicious phenomenon.

Siciliano continues, “Basically the parents’ failure to essentially imagine or determine all the ways in which a child could ‘escape’ failed.”

An alarm system that lets off a siren when a door or window is cracked open will solve the problem. 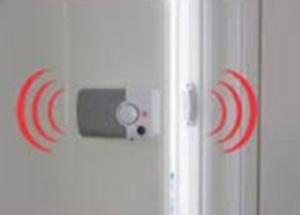 For people who live in apartments and don’t have much money, again, home security companies have deals for lower-income parents.

Besides, these tragedies often strike parents who have plenty of money. In one pool drowning case, the home had been purchased for $900,000.

“Corrective action is generally taken on use of 20/20 hindsight, which is reactive,” says Siciliano.

“Being proactive means making a concerted effort to imagine all of the possibilities in putting systems in place.”

That’s two possibilities. Once the preschooler gets past either one, then YES, there are so many possibilities, save for being abducted by an extraterrestrial.

Alarm and lock systems are only as good as a parent’s ability to remember to keep them activated.