10 Tricks Fast Food Restaurants Use to Make You Overeat 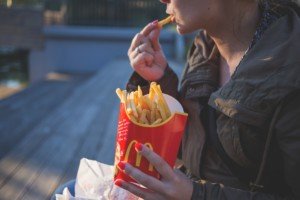 There are 10 tricks that fast food restaurants use to make  you overeat or give too much food to your kids.

The result is unwanted weight gain and obesity for many.

Ever notice that the giant building for a business center has a tiny little sign out front that you can barely find, but Joe’s BBQ Stand has a sign bigger than an 18-wheeler with blaring red letters surrounded by bright orange “flames”?

And it’s not just the small Ma and Pa establishment that relies upon visual attraction. The big guns in the fast food industry pull this tricky stunt too.

Dr. Lenard Lesser of the Palo Alto Medical Foundation Research Institute says in the report that “marketing gets people to eat more.”

Big huge billboards off to the side of busy highways begin grabbing motorists’ attention from far away. 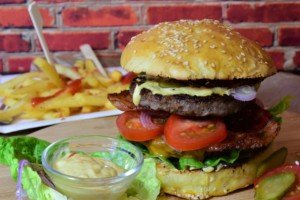 She explains, “It’s well-known that we are influenced by the colors red and yellow to eat more and to eat faster. Conversely, ‘cool’ colors like blue and green cause most people to eat less.”

“Value Meals typically give you an extra item for less cost, encouraging you to overeat,” says Cunningham.

Some “meals” are actually cheaper than the individual sandwich in that meal.

Not wanting to feel like they’re over-spending, people will order the “meal” and end up overeating.

By definition, “fast food” is convenient. But the speedy time it takes to hand over your order is just the beginning.

Due to the large volume of fast food establishments in locations that are heavily frequented by people, many families end up eating dinner or lunch in the car – between rushing around to carry out the day’s activities and being “too exhausted” to make a healthy meal at home.

Note how thick and sturdy the disposable food trays are for some fast food giants.

You can trust even the clumsiest kid in the backseat with these.

“You order food while you’re there, and your kids get used to the food. This creates brand loyalty among your children for that particular restaurant.

“The next thing you know, the fast food chain has new customers for life, all because they had the best playground in town.”

According to Statista, the Statistics Portal, here’s how many TV commercials American kids six to 11 see every year for various fast food giants:

“The kids’ meals and the toys inside them are there to create brand loyalty among children, so that parents can unwittingly help fast food restaurants create customers for life,” says Cunningham.

“When kids’ meals include dessert, or when you can trade the toy/book for dessert, this encourages kids to consume sweets they might not normally eat, because the sweets are included with the meal,” says Cunningham.

You may recall the McDonald’s slogan of decades ago that was sung in a jingle, “You deserve a break today, so get up and get away, to McDonald’s.”

Then there’s “i’m lovin’ it” and all the slogans in between, including for other fast food behemoths.

Remember the one for Arby’s some years back, a campaign featuring a young man newly living on his own, whose mother worried that he wasn’t eating properly?

This had appeal to young men striking out on their own for the first time, plus their mothers who probably suggested that their sons eat more at Arby’s.

Lean, attractive people are hired for these commercials for a reason. Occasionally a man might be husky, but when’s the last time you saw an overweight woman in TV commercials for fast food?

Julie Cunningham specializes in helping men and women with diabetes and prediabetes learn how to eat to manage their blood sugars–so they can get back to the things they enjoy.