It’s Okay NOT to Share Your Dessert at a Restaurant! 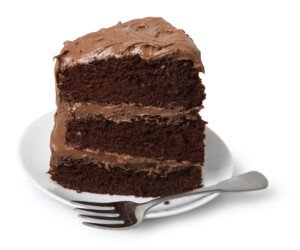 Have you ever ordered a tantalizing dessert, and once it is placed before you, two, three or more people at your table want a sample? By the time you’re done “sharing,” there’s not enough remaining to sate your desire, and you are left feeling very deprived.

I once read in an advice column of a woman who noted that whenever she was the only one in her dinner party to order dessert, the wait staff would place it in the center of the table with extra forks, rather than simply right before the woman.

Nobody ever wants some of your salad, bread, soup, chicken, pasta or mashed potatoes. So why do they think it’s perfectly okay to request a “little bite” of your dessert? Are you guilty of this? Do you think this isn’t rude?

Even if the so-called etiquette experts approve of this, who made them the final judges?

I’m a chocoholic. I do NOT want to give up a “little bite” of my Death By Chocolate. (And you know that the asker is expecting more than a “little bite.”)

If THAT person feels uneasy about my refusal to give up some of my dessert, then that person can easily order some for herself.

And if you don’t think you can finish it all, take the rest home in a doggie bag.

Or, if you’re worried you’ll blow your diet, then again, eat a little bit, then put the rest in a doggie bag.

Why do so many people expect dinner companions to share their dessert?

“By social convention, dessert is often expected to be shared and is set down in the middle of the dining table,” says Patricia Celan, MD, a psychiatry resident at Dalhousie University in Canada.

“There can be many reasons for this, one of which is the calorie-shaming that modern society has instilled in many people.

“True, there are people who need to watch what they eat in order to take care of their own health.

“If you’re not one of those people though, maybe you want that delicious slice of chocolate cake all to yourself.

“Don’t let yourself be shamed or pressured into giving up the full dessert.

“Just communicate this clearly to your dinner partner and the waiter, and enjoy having your cake (and eating it too – alone!).”

Solutions to Avoiding Having to Share Your Dessert at a Restaurant

• Order your dessert to go. This may have a few others at your table feeling let down, but it’s your right.

• Discreetly inform the server to set the dessert right before you with no extra forks/spoons.

• If you’re asked for some of your dessert, tell that person, “How about if I eat what I can of it at first, and if there’s any left over, you can have some.”

I don’t recommend this to your future mother-in-law whom you’re meeting for the first time, but this is perfectly appropriate for a coworker at an employee function or at some single’s event where you’ve been randomly assigned some dinner-mates.

• The preceding response is also fine if your among cousins, even siblings, or out to dinner with old college buddies. But don’t dare use it on the person who’s in a position to hire you for the new job you’re interviewing for.

Why is it considered rude when a person does NOT offer any of their dessert to anyone else at the table?

It’s never rude when someone doesn’t offer any of their pork chops, fish, shrimp, rice, coleslaw or any other part of the meal.

Dessert is the best part of the meal. Do not spoil it for someone by asking for “just a little bit.”

And don’t assume they don’t mind. They are likely just like the woman mentioned above who wrote to the advice columnist: lacking the backbone to point out your very rude behavior.

And that “little bite” might end up being a huge chunk. This reminds me of the time when I was in grade school and asked my sister for a “little bite” of her Captain Crunch ice cream bar. I took the biggest bite possible, leaving her with literally only half the bar.

She was shocked, while I struggled (quite happily) to manage the large amount of ice cream in my mouth.

You just never know what someone’s idea of “just a little bit” is. Of course, you can get around this by taking an extra utensil and serving up the bite yourself.

Finally, sometimes the “little bite” requests come from people who have actually ordered a dessert.

Many times I have found myself looking down at my delectable chocolate power cake, yet at the same time, looking forlornly at someone else’s different dessert, perhaps this sinful-looking apple pie.

But rather than spoil their pleasure by asking to try some, I just tell myself that next time I’m at the restaurant, I’ll get the pie.

Or…I’ll just order a piece of the pie to go after eating the chocolate cake! Brilliant solution!