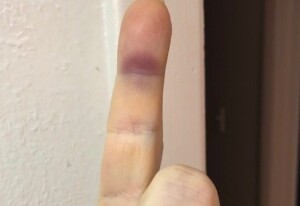 Have you noticed a purple bruise under your index finger that seemingly came out of nowhere?

Perhaps it doesn’t even hurt when you use the finger, and the only reason you know it’s there is because you saw it by chance.

If you press on it hard enough, it may feel sore, but for all practical purposes, it’s painless and there’s no numbness or tingling.

Has the thought of a blood clot come to mind?

Before you jump to conclusions and panic, you’ll want to recall any physical activity you did in the past 24 hours involving the affected hand.

One day I just happened to notice, by chance sighting, a painless purple bruise on the underside of my index finger.

It was located right where the topmost crease is under the finger.

I wondered what I’d done either that day or the day before, as far as applying a lot of pressure to that area.

Well, I had deadlifted the day prior, but that never had caused any bruising to my finger.

However, several hours prior to discovering the bruise, I had held a 15 pound dumbbell in each hand and jumped up and down, arms straight at my sides.

It was rapid jumping, as you would if using a rope.

My wrists had begun to “burn” as I continued jumping, stopping at 150. I had only recently begun using the 15 pounders for this jumping drill, so my hands weren’t quite used to them for this exercise.

As I jumped, the stem of the dumbbell jerked against the underside of my fingers.

The area beneath my index finger apparently received the brunt of this erratic force, because the dumbbells were tilted downward a bit as I jumped.

I felt very confident that this had caused the purple bruise (fresh bruises are purple). The mobility and strength of my finger, however, was NOT affected.

I forgot about it after taking a photo.

Next day, as I had anticipated, the bruise was barely visible.

If you notice a localized bruise under a finger, you may find the explanation upon reviewing any very recent activity in which pressure was placed against that area.