Does a Picture Really Tell How Confident a Big Woman Is?

“I wish I had your confidence!” is a recurring post on the Instagram pages of very plus-size influencers every time they post a picture of themselves flaunting a lot of skin or wearing form-fitting clothes.

I’ve been keeping up with three of these influencers. All three have admitted to mental health issues.

We all get depressed and suffer from anxiety, but when someone admits to “bawling my eyes out” upon reading negative comments from strangers on her Instagram pages, this makes one wonder about the state of her self-confidence.

This same woman, whose weight has been listed at 330 pounds, makes a lot of money off of Instagram collaborations, a YouTube channel and other social media ventures.

She has a dream job that pays handsomely, yet bawls at the negative comments that are part of that dream job. This doesn’t add up – unless she actually lacks self-confidence.

Every time she posts pictures of herself in swimwear, casualwear, skirts and dresses, here come the flood of comments: “I wish I had your confidence!” or, “You’re so confident!”

Is it really possible to determine a woman’s confidence level by a split-second moment in time captured on film?

How many times have you read a story of an abused child – yet noted how happy that child appeared in family photos?

It’s the same principle. You cannot tell by a photograph someone’s mental state.

Ever see pictures of what appear to be very blissfully married couples? Then you learn they’ve been fighting for years and are finally getting a divorce?

Sometimes, a photo is NOT worth a thousand words.

The most miserable, most mixed-up woman in the world can have a great, “confident” picture taken of herself. Marilyn Monroe, anyone? Judy Garland, anyone? Kate Gosselin?

Pictures are very deceiving. We don’t know what that woman was doing or feeling moments before the photoshoot and for the hour following.

The second influencer I track is very famous in the body positivity community and has appeared on the cover of Cosmopolitan UK and a few other covers. 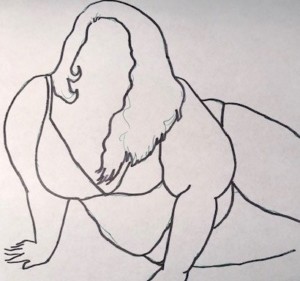 Over and over, fans post, “I wish I had your confidence!”

This extremely large model has professionals fuss over her hair and work on her face for who knows how long before the shots are taken.

She is posed over and over so many shots can be taken. This is how photography works in the modeling world. These photographers don’t just take one shot and that’s that. That’s why shoots can literally take all day for just one model.

This particular model has posted much about her personal life. She is one very troubled soul who just happens to be blessed with a striking face and timely opportunity. This doesn’t equate to confidence.

According to her posts, she has far greater issues than the average woman. These are issues that don’t go hand-in-hand with a confident woman.

Anyone can pose confidently for a picture — even children who are savagely abused by their parents or a battered woman with zero self-esteem.

REAL confidence is what you can do when you’re faced with life’s curveballs, not how you look in a photo.

The third plus-size influencer has posted about how troubled she was during her teen years, as well as all of her current struggles.

Yet her fans think she has all of this amazing confidence SIMPLY BECAUSE she has posted hundreds of pictures of herself smiling in many different bikinis.

How many times have we heard the “health at all sizes” camp declare that it’s impossible to tell a person’s health by a photo?

Yet many of these same women swear you can tell a woman’s confidence level by a photo!