Why It’s Body Positive to Exercise Hard Rather than Joyfully 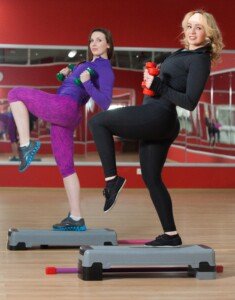 Body positivity means working out like a warrior because this will significantly reduce your risk of dying from cancer and heart disease.

Some self-love and body positive influencers insist that vigorous exercise is a sign of negative body image or obsession with burning calories.

But according to research, hard workouts have a VERY protective effect against the risk of dying from heart disease and cancer.

This is yet one more reason to gun for tough aerobic workouts. Yes, they burn more calories than “joyful movement,” but what would you expect when comparing fast running intervals on a treadmill to swiveling your hips in the kitchen?

The research, headed by Dr. Jesús Peteiro, comes from the European Society of Cardiology.

In the report, Dr. Peteiro urges women to exercise as much as possible and that fitness protects against mortality from any cause.

The study included 4,714 women referred for treadmill echocardiography because of a known or suspected coronary heart disease.

Even if You Don’t Have a Treadmill, Keep Reading…

The participants used a treadmill because this device is a handy implement for research.

But the concept isn’t about type of aerobic equipment. It’s about intensity of movement.

Thus, even if you don’t use a treadmill and prefer other modes of activity, there’s still something BIG to take away from this study.

The women walked or ran on a treadmill, gradually upping the intensity, continuing until exhaustion.

During that time their heart was imaged.

Perhaps you’ve seen “METs” flashing on the console of your favorite cardio equipment.

MET stands for metabolic equivalent. Ten METs – which is considered good fitness — equates to walking quickly up four flights of stairs or rushing up three flights – without pausing.

Below are MET-hour equivalents of other common activities. 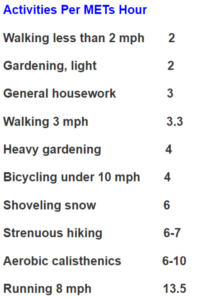 The women were followed for an average of 4.6 years. It was found that at least 10 METs were significantly associated with a reduced risk of death from heart disease and cancer.

According to the above METs list, joyful movement – at least what is promoted by very overweight influencers – comes in at around 2 to 3 METs per hour.

This doesn’t mean you should give up joyful movement entirely. Keep doing it if it give you joy. But…

…If ALL YOU DO for exercise is joyful movement, your body will not be fit enough to achieve at least 10 METs. You need to add in more demanding activity.

But if you’re free of disabling medical conditions, then you should forge ahead like a warrior (within safe parameters, e.g., don’t knock yourself out in the hot sun with little water).

Never mind what those Instagram influencers say about vigorous exercise. I wonder how many of them can dash up three flights of stairs or comfortably run 100 meters along a coastline.

Though the women in the study were between 50 and 75, there’s no reason to extrapolate that the study results wouldn’t apply to younger women.

A Note to Treadmill Users

Keep your hands off the machine unless you’re taking a brief heart rate check, drinking water or changing the settings.

If a treadmill shows METs, this will be based on the settings, not your effort.

So if you set the machine at high incline and a fast speed, many METs will be displayed – even if NOBODY IS ON THE MACHINE. So don’t be fooled by the METs or calorie readout if you’re holding on.

However, if you’re not holding on while the METs reaches 10, then you know you’re fit!