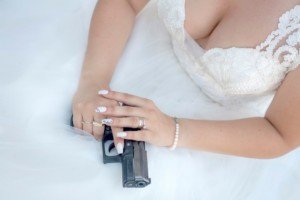 Watch enough ID Channel and you’ll know there’s a reason why the abuser in a relationship can be a woman physically weaker than the victim.

Violence doesn’t know size. It’s been said, over and over, that when a woman is abused by her boyfriend or husband, she can’t fight back or take control because he’s “bigger and stronger.”

But when you get right down to it, the issue isn’t height, weight or muscle mass.

There is a huge imbalance of power.

The person who wields the power – that is, the fire inside their mind – is the person who will have control of the dynamics. This is NOT a function of height, weight or muscle mass.

Evidence for this is screaming loud when you consider that in some corrupt relationships, the abuser – the one with dominion – is the female.

Look no further than the ID (Investigation Discovery) Channel – chockfull of docudramas focusing on varying aspects of homicide.

While some of these ID Channel shows start off with the murder and focus on the subsequent investigation, others concentrate on the relationship dynamics between what will eventually become the victim and the killer – leading up to the murder late in the episode.

When Women Have the Upper Hand in a Relationship

Watch ID Channel enough and you’ll realize that in an abusive relationship, a size and muscle advantage on the part of the male abuser is merely a tool that he uses because it’s readily available.

So if the abuser’s hands easily wrap around his wife’s small neck, he’ll know these are convenient tools to use as part of his control.

If it’s easy for him to knock her to the floor, that’s another tool. If he’s strong enough to pick her up, that’s yet another tool.

The abuser will use whatever tools are handy when rage strikes.

But what about when a woman is the abuser?

For obvious reasons, abusive women are not apt to choke their husbands or boyfriends to show who’s in charge.

They do not attempt to slam them into a wall, shove them to the floor, drag them around or ram a punch into their torso.

However, it needs to be said that – depending on the mindset of the male victim – female abusers certainly have been known to beat up on them with their bare hands. If a submissive man allows it, he can literally get beaten up by a woman with much less muscle.

How an Abusive Woman Uses HER Tools

Abusers, male and female, will not gravitate towards a potential partner whom they sense will not let anyone control them.

Control freaks have a knack for filtering out whom they can manipulate and control.

Since ultimately, the abuse dynamic originates in the MINDS of both parties, the abuser need not be physically stronger than the victim.

While the female victim certainly cannot physically assault her boyfriend or husband the way a male abuser can assault his girlfriend or wife, there are other ways that she exerts control over, and induces fear in, her bigger and physically stronger partner.

She uses the tools that are handy for HER. These include:

• Threats of suicide or actual “attempts”

• Buying lavish things for him, especially early on in the relationship

• Using any available object to assault him with

• Insulting and humiliating the man in public. One woman was relentless in publically insulting her husband’s caretaking skills of their baby.

• Stalking the man after breaking up, including unremitting phone calls and text messages.

• And remember, these unhinged women will NOT get involved with Alpha males.

“Research tells us that mental illness is not associated with violence as much as stereotypes would suggest,” begins Patricia Celan, MD, a senior psychiatry resident at Dalhousie University in Canada.

“As such, women are just as capable of committing dangerous or violent actions.

“While men are, on average, more likely dangerous and violent, women are also capable of doing terrible things.

“They may do those things less commonly, or they may use their words and social status to intimidate someone rather than physically beating someone up, but some women can inflict as much damage as men. Cruelty is certainly not preserved for males alone.”

Abusive women are perhaps more dangerous than abusive men because they usually CAN’T rely on their natural physical strength to overpower their victim.

They are more likely to use a gun or knife. I’ve seen six ID Channel episodes in which the female killer used a baseball bat.

Whereas, the abusive man frequently attempts to murder a woman via bare-hand strangulation.

Though there are many cases in which the woman’s cause of death was a bullet or knife wound, let’s face it: The vast majority of strangulation victims are female.

There have been cases (watch enough ID Channel and you’ll know) in which a beaten or strangled woman faked death, convincing the man to end the attack and leave.

There are cases in which a woman, in the midst of a bare-hand assault by a man, is able to escape.

But an abusive woman is more likely to pull out a gun and just keep shooting, or stab him while he’s asleep. What chance does her victim have?

And of course, these women are notorious for manipulating other men, with false claims of domestic violence or promises of a big monetary payout, to shoot their husbands.

It’s All About the Tools at Hand

In summary, it doesn’t come down to who can bench press more weight. It’s about who has the mind control.

And that person will then use whatever tools assist him – or her – in maintaining control of the relationship. The imbalance of power comes down to mind, not muscle.