Shortness of Breath from Heart Disease vs. Lung Cancer 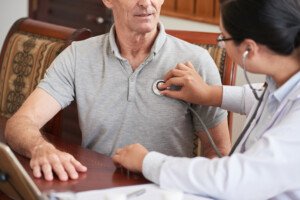 Shortness of breath can be caused by heart disease as well as lung cancer, but is there a difference in how feeling short of breath feels between these two very different conditions?

This type of heart disease is called coronary artery disease.

Another form of heart disease is chronic heart failure. In both CAD and CHF, the patient may have episodes of shortness of breath – including at rest.

Lung cancer is also notorious for leaving the patient feeling short of air with little and even no exertion.

“I am of the understanding that the feeling of being short or out of breath is a symptom unrelated to the cause, be it lung cancer, heart disease or vigorous exercise,” says Alex Little, MD, a thoracic surgeon with a special interest in esophageal and lung cancer, and clinical professor at the University of Arizona.

Dr. Little explains, “The feeling comes from the brain detecting that the supply of oxygen is less than what the body needs.

“The mechanisms by which these three causes create this imbalance differ, but, to the brain, the cause doesn’t affect the feeling of being short of breath.”

Thus, it’s impossible to tell that someone probably has lung cancer due to the way his shortness of breath feels to him – as he describes it to a doctor.

Same with coronary artery disease, heart failure or some other cardiac issue such as a valvular defect.

“There are perhaps two different types of shortness of breath,” says Christopher J. Hanifin, PA-C, who was previously a physician assistant in open heart surgery with Cardiothoracic Surgery of South Bend in South Bend, IN.

“One is a feeling that mechanically you cannot get air in and out of your chest,” says Hanifin.

“This is the case with someone experiencing an asthma attack. If you can imagine breathing through a drinking straw, that is what this feels like.”

Neither lung cancer nor heart disease cause a mechanical difficulty with breathing.

A vocal cord spasm is another cause of mechanical breathing difficulty — inhaling in this case.

“The other type of shortness of breath occurs when you feel short of breath in spite of being able to get air in and out of your chest,” says Hanifin.

“This is the case with something like pulmonary embolism [or lung cancer]. There is no obstruction to airflow, but because blood can’t get to the lungs, you develop a sensation of shortness of breath.

“Different heart and lung problems could potentially cause either sensation, so the character of the shortness of breath might not help distinguish between the two.”

• Pain in the jaw, neck, throat or arm

• Swelling in the lower extremities

• Coldness in the extremities

New-onset shortness of breath, from activities that previously had not caused this symptom, needs to be investigated.

There are many explanations, including metastatic breast cancer in the lungs or significant weight gain.

If you normally don’t exercise and then one day find yourself short of breath while helping someone move, this is a wakeup call to commit to a regular exercise program.

And if you smoke (another cause of shortness of breath, though the onset would be gradual rather than sudden), then QUIT.