Can a Woman’s Period Affect Her Gums? 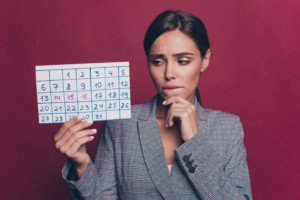 The hormones that bring on menstruation will also have an effect on your gums – and you will want to know what that effect is.

So while your focus may be on the usual pains that go along with menstruation, issues may also be occurring in your mouth that need attention.

When your monthly period comes around, it’s time to pay extra attention to the health of your gums and any gum problems that may develop.

The hormones involved with the menstrual cycle affect your gums. Estrogen and progesterone cause an increase in blood flow to the gums, causing them to swell, turn brighter red and become tenderer.

Normally, these symptoms will appear a couple of days before menstruation and then disappear after your period has started.

A more serious problem may develop during this time – gum disease.

Instead of disappearing after a couple of days, it may continue to become worse. It’s more likely to occur when there is not enough regular tooth care. Being slack on flossing and brushing will promote gum disease.

Being that the gums often become swollen, this can make it more difficult to brush and floss.

Still, it needs to be done to prevent serious gum disease.

If it becomes difficult, make an appointment with your dentist for some advice rather than ignoring the situation.

Canker sores are another possible problem, which can arise during menstruation. The good news is that they will disappear quickly once the cycle ends.

The first phase of gum disease is called gingivitis. The symptoms are bleeding, inflamed and swollen gums.

The inflammation may be hard to notice since they are already inflamed from your period. When this happens, it’s very important to brush and floss twice a day, which will usually eliminate early-stage gum disease.

If steps are not taken to eliminate it, it’ll progress. The bacteria that cause gum disease will continue flourishing and will trigger an immune reaction.

This will lead to gum destruction – which is why they recede.

Another consequence is destruction of the ligaments that support your teeth, and damage to the jawbone. Over time, your teeth will become loose and may even fall out.

Gum disease has been linked to some serious health problems including cardiovascular disease, rheumatoid arthritis, cancer, dementia and diabetes.

The bacteria multiply faster and produce more acid when you eat sugary foods. They feed on the sugar and produce acid as a result. Together, they irritate the gums and can cause gum disease.

Dentists will often advise women to have dental cleanings and other dental treatment at least a week after their period cycle is over. At this time, the hormone levels have become normal and the gums are no longer swollen or sensitive, which can make recovery less painful.