What Makes Gums Look White? Could It Be Cancer? 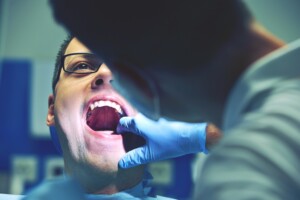 White gums are not normal. They mean something is wrong. This includes the possibility of cancer.

Healthy gums will normally be uniformly pink. Certain health conditions, mostly inside your mouth, can cause them to turn white or a lighter shade of pink than normal.

White gums mean you should see a dentist because this symptom is more commonly caused by gum disease than cancer.

What are the causes of white gums? In no specific order:

Oral thrush, also called oral candidiasis, is a yeast infection that occurs in the mouth.

It can go from the lining of your mouth to your tongue or gums.

It’s creamy white in appearance, and medication will be needed to eliminate it.

If you have a deficiency of vitamin K, it can cause your gums to look white.

The vitamin is very important because it enables the blood to clot, which helps stop bleeding.

Other symptoms you may have that indicate a shortage of this vitamin include irritability, bruising, dark stools, seizures and pale skin.

Sometimes the chemicals used in teeth whitening will also turn your gums white.

This problem will likely go away after a few hours.

Leukoplakia forms thick white spots on your gums, inner cheeks, tongue and the bottom of your mouth.

The patches are irregular in shape and can become hard. On some occasions, the white patches may form alongside red patches, called erythroplakia, and these may sometimes become cancerous.

Most often, they occur in the elderly and among smokers.

The cause is still unknown.

Cancer in the mouth can occur in any part of it as well as the throat.

It’s often painless and may appear as a white spot on your gums, but oral cancer comes in many forms.

Because it often spreads fast and is often fatal, you should have any sores in your mouth examined by a dentist if they do not disappear after two weeks.

Anemia is the one problem that can cause white gums that do not originate with your mouth or teeth.

It’s caused by an insufficient number of red blood cells in the body.

Without a healthy amount of these cells, your body and organs are not getting enough oxygen.

Most likely, your skin may also be pale. Other symptoms may include weakness, fatigue, an irregular heartbeat, dizziness and shortness of breath.

Several conditions, including medical, can lead to anemia, such as heavy menstruation, hypothyroidism, pregnancy and at least 10 kinds of cancer, says Mark Levandovsky, MD, founder and medical director of Preventive Medicine and Cancer Care.

If plaque is left on the teeth for prolonged periods, the bacteria that cause plaque will irritate the gums and produce gum disease.

At first, gum disease is called gingivitis in the early stages.

In the early stage, gingivitis can normally be resolved by brushing your teeth twice a day and flossing.

If allowed to continue due to a lack of improved oral hygiene, it becomes periodontitis.

While the primary cause is poor dental hygiene, there are other factors that will increase risk even with regular brushing and flossing.

• Crowns and fillings that no longer fit well

Persistently white gums mean a health problem – though usually it’s not serious. Make sure to get your regular biannual oral exam, and if gum disease is diagnosed, you should not avoid treatment.