Should an IVC Be Placed in Every Joint Replacement Patient? 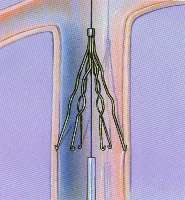 It seems that it would make sense to perform the 20 minute procedure on a pre-emptive or prophylactic level, especially for patients with the greatest risk for a deep vein thrombosis (e.g., advanced age, smoking history, obesity).

An IVC filter can prevent a DVT from getting into the lungs where it can become quickly fatal as a pulmonary embolism. There’s no telling when a deep vein thrombosis might become dislodged and travel to the lungs.

An IVC placement is non-invasive.

Another question is why, once a DVT is actually diagnosed, the inferior vena cava filter isn’t automatically placed.

A pulmonary embolism is a leading cause of cardiac arrest. Death can result within minutes of the DVT breaking off from its original location.

If the pulmonary embolism is big enough, it’ll prevent air from getting into the lungs. The patient will essentially suffocate.

“It is true that they can be placed less invasively, but they are not without potential complications—vascular injury, migration, post-thromboembolic issues such as leg swelling and pain,” he continues.

“Some higher risk patients may be candidates for a filter—prior PE and intolerance to anticoagulants—but this would be up to discretion of the surgeon and a vascular consultation.”

Wouldn’t the pros outweigh the cons?

After all, it’s estimated that a quarter of a million Americans die every year from a pulmonary embolism (some estimates go up to 300,000 and more), and though many of these deaths are from non-surgically related PEs (i.e., air travel), many are complications from joint replacement surgery.

“Filters for all patients would be a huge expense to prevent a complication that typically happens less than one percent of the time after joint replacement surgery,” says Dr. Boucher.

One percent sounds insignificant, but the large death toll can be attributed to the number of hip and knee replacements done every year in the U.S.

According to the American Academy of Orthopaedic Surgeons, over 800,000 hip and knee replacements were performed in 2003. Currently that number exceeds 900,000.

“Most DVTs are treatable without progression to pulmonary embolism. Most lower leg DVTs are not a problem; we worry much more about ones behind the knee and in the thigh.”

Dr. Boucher’s specialties are hip and knee surgery, replacement and revision, and sports medicine surgery. He has been the recipient of the Golden Apple Award for teaching excellence multiple times.