Sudden Racing Heart Only Briefly Plus Shortness of Breath 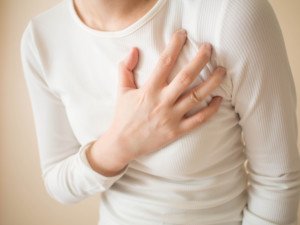 What are the possible causes of a sudden but briefly racing heart with shortness of breath?

And do the causes differ with young people vs. older?

The symptom pairing of suddenly your heart is racing (even if briefly) plus shortness of breath is downright scary – even in exercise enthusiasts who don’t smoke nor have a diagnosed condition like diabetes.

“Want to know why doctors get gray hair? A problem like this is one of the causes,” says Roger Mills, MD, cardiologist and former professor of medicine, University of Florida.

“Are the symptoms a sign of panic attacks or an indication of organic heart disease?” continues Dr. Mills.

“Some young people have heart disease and some older people have panic attacks, so age alone can’t be used to make a firm diagnosis.”

The medical term for a heart rate that’s faster than it should be is tachycardia.

If you’re sitting in a cardiologist’s office waiting for the doctor to come in, you may have anxiety-produced tachycardia.

“In those situations, individuals have a rapid but otherwise normal electrocardiogram.

“When the rapid heart rate occurs suddenly and without any obvious cause, the electrocardiogram will often show an abnormal pattern of cardiac electrical activity called an arrhythmia.

“Arrhythmias may originate in the atria, the upper chambers of the heart, or in the lower chambers, the ventricles — the pumping chambers.

“The supraventricular tachycardias may cause annoying palpitations [or a racing but steady pulse], shortness or breath or lightheadedness. However, they don’t cause loss of consciousness or sudden death.

“On the other hand, ventricular tachycardias almost always arise in the context of significant, known heart disease and may be life threatening.”

“I’m Healthy; Why Does My Heart Suddenly Race then Go Back to Normal?”

Dr. Mills explains, “Here, we’re talking about supraventricular tachycardias. In the big picture, epidemiologic studies indicated that 10-20% of persons experience panic attacks, and about two-thirds of them have recurrent attacks.

“In contrast, the best available evidence indicates that the prevalence of supraventricular tachycardia in the general population is 2.29 per 1,000 persons.

“When adjusted by age and sex in the U.S. population, the incidence of paroxysmal [sudden occurrence] supraventricular tachycardia (PSVT) is estimated to be 36 per 100,000 persons per year.

“Those with PSVT without any (structural) cardiovascular disease are younger (37 versus 69 years) …and have faster PSVT (186 bpm versus 155 bpm). Women have twice the risk of men of developing PSVT.”

Adding Shortness of Breath to the Sudden Racing Pulse 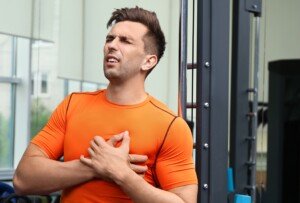 “An episode in which an individual experiences the sensation of rapid heartbeat and shortness of breath may have a variety of causes,” says Dr. Mills.

“Stress and panic attacks may affect up to one or two persons in every 10, whereas episodes in which a heart rhythm disorder — a paroxysmal supraventricular tachycardia — are not unusual, but probably affect only two in a thousand.”

The stress is not necessarily of a sudden acute type such as hearing a window break in the middle of the night.

Stress that affects the heart this way may also be chronic or ongoing, kind of like a computer malware program quietly running in the background.

The life stressors (e.g., ailing elderly parent) aren’t necessarily in one’s conscious thoughts all the time, but like behind-the-scenes malware, still affect the functioning of the body.

What to Do when Your Heart Suddenly Races

The catch here is that the briefness may not last long enough for you to do this. By the time your finger gets to your wrist or neck, you’re hearing the last few beats of the rapid episode.

In this case, imprint in your mind the cadence (“beat”) of the pulse if you believe it was steady.

How fast was the “boom-boom-boom”? Imprint this cadence so that you can vocalize it (or tap it on a desk) to your doctor.

“Second, get an ECG during the symptoms — this may require having some sort of long-term monitoring, but it’s worth the effort.” A superficially implantable event recorder will enable this.

“Third, if the ECG confirms the diagnosis of PSVT, ask to see a specialist in electrophysiology.

“There are lots of different varieties of paroxysmal tachycardia: A-V nodal re-entry, paroxysmal atrial fibrillation or flutter, and the list goes on.”

• Symptoms may last seconds or minutes, to hours to days.
• They may come and go with months in between.

“But, many of them can now be treated very effectively with an ablation procedure,” says Dr. Mills.

For some patients, the ablation is done not out of medical necessity but to relieve the patient of intolerable symptoms.

“Ventricular tachycardia is an even more complicated subject. If you, or someone you know, have experienced VT, I suggest reading my friend Bernie Witholt’s story, “240 Beats per Minute. Life with an Unruly Heart.”