What’s the Slowest a Heart Attack Can Occur? 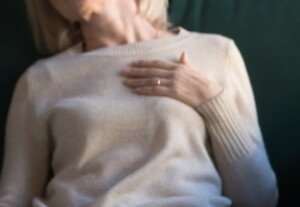 Is there a such thing as a slow motion heart attack?

Do not equate the so-called silent heart attack with a slow one. The silent type may occur over a period of only moments but go unnoticed by the patient because it presented in a very atypical fashion:

symptoms below the patient’s radar such as only mild chest pain and/or a momentary shortness of breath.

An older person may likely brush off subtle symptoms as due to age, stress or physical exertion.

Can a Heart Attack Occur Over Days?

“A true ‘heart attack,’ known technically as a myocardial infarction, results from sudden cessation of blood flow to an area of the heart as a result of the sudden formation of a blot clot, formed over a roughened (sclerotic) area within the lining of an artery in the heart,” says Morton Tavel, MD, Clinical Professor Emeritus of Medicine, Indiana University School of Medicine, and author of “Health Tips, Myths and Tricks: A Physician’s Advice.”

“This process occurs over a matter of about 10 minutes or less and results in the onset of the abrupt onset of severe, often ‘crushing’ pain in the center of the chest,” continues Dr. Tavel.

“Although there are atypical variations of this onset, by far this is the most typical.”

This isn’t about symptoms. It’s about how long the heart attack takes to happen.

The event may take under 10 minutes – only one minute, for that matter – and in different people cause different symptoms, ranging from mild to severe.

There’ve been people, after their diagnosis of a heart attack, who then have reported experiencing symptoms for days leading up to the so-called big event.

This creates the illusion that their heart attack took several days to occur.

In actuality, the conditions that led to the myocardial infarction, in these patients, began causing symptoms for several days before the actual 100 percent blockage occurred.

It may have been that the clot began as small – not big enough to 100 percent obstruct the artery, but over a few days it just got bigger until finally it completely closed off the artery: a heart attack.

However, it’s impossible to know exactly what went on inside the coronary arteries of these patients prior to their diagnosis.

In other words, did a piece of soft plaque break off and take a few days to lodge in a certain way that it blocked the artery 100 percent?

The divot that’s left from the broken-off area of plaque will form a plug instantly. This is the body’s protective mechanism for plugging up the impression left by the departed plaque fragment. 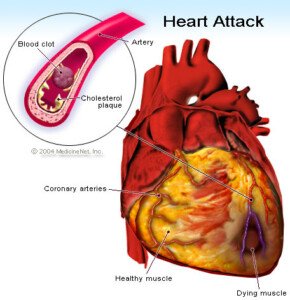 The substance fibrin is called to action. The problem is that this process over-corrects and creates a plug that completely blocks the artery: a heart attack.

Meanwhile, the plaque fragment that had broken off ultimately may never completely block any artery further down.

But again, the actual 100 percent closing-off of a coronary artery is the heart attack. If it’s closed off 99 percent, this is not a heart attack. It’s a severely occluded (obstructed) blood vessel.

Extreme Blockage in an Artery

This extreme occlusion – regardless of cause – may produce symptoms that feel like a heart attack is in progress.

For days the patient may experience an increasing level of chest pain and/or malaise, or shooting pain down their left arm, a jaw ache, etc.

But if blood cells are getting past that 99 percent blockage, they are not having a heart attack.

However, on the third day, if that 99 percent becomes 100 percent, that’s an official myocardial infarction. It can take only moments to go from 99 to 100 percent.

Angina is a condition in which a patient experiences chest pain and shortness of breath (sometimes just chest pain and sometimes other symptoms like nausea and arm pain) due to transient reduction in blood flow in the cardiac muscle. Physical or emotional stress bring on the symptoms.

As this condition gets worse over time, it takes less and less physical exertion to bring it on, until finally, symptoms occur even at rest (unstable angina).

But this is still not a heart attack.

In the case of a silent heart attack, the patient never knows it happened and continues living life as usual after the event.

But the event still took only minutes to occur.

These events are discovered only later on when imaging reveals cardiac scar tissue.

Only then does the patient look back and realize that the transient heaviness in their chest and short-windedness while they were climbing a flight of stairs was probably when this event had occurred.

It’s also possible for a coronary artery to be 100 percent blocked but, before it gets this bad, smaller collateral vessels have already formed around it, carrying blood to the other side of the blockage.

But not everyone with coronary artery disease is lucky enough to have these collaterals.

Another way a heart attack can happen is if, over years, the increasing plaque buildup narrows the interior diameter of the artery so much that one day, blood cells can no longer fit through the opening: a complete blockage, a heart attack.

No plaque fragment breaks off in these cases.

Rather, that diameter just one day gets too small for the passage of enough blood to keep things working.

In summary, a heart attack takes only minutes.

There is no such thing as a slow motion event.

But the symptoms leading up to it may occur over days, even months, from occluded vessels.

And the symptoms may persist after the event as well.

In atypical heart attacks, symptoms may exclude chest pain and shortness of breath and consist of only neck and jaw pain, or only nausea and head pain, or some other unique presentation.