Why Your Poops Are Sometimes Pointy 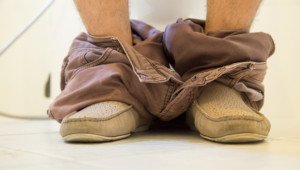 Are the ends of your poops shaped like a spear or pointy?

Usually, when stools come out, they have bulbous or clumpy ends when they are well-formed.

But every so often, you may find that your formed stools resemble miniature torpedoes.

“Pointy stools can be normal and are typically not something patients should necessarily seek care for unless they are having rectal bleeding, severe diarrhea or other symptoms,” adds Dr. Sengupta.

When bowel movements come out looking like pencils, ribbons or strings, then this is something to be concerned about, as this suggests a possible blockage in the colon that’s altering the shape of the feces as it is voided.

Nice big poops that just happen to have pointy ends are nothing to worry about, but it’s natural to be curious about this.

Think of squeezing toothpaste out of a tube and then stopping. The end of the toothpaste blob might come out pointed. Or it may not.

You should pay more attention to color. Anything that is whitish, yellow or grey is concerning.

If there is what appears to be blood mixed in the stools (red, maroon or black), this indicates bleeding somewhere in the colon.

However, consumption of beets or beet juice can also cause a reddish tinge about one’s bowel movements that can really scare the dickens out of people who don’t know that beets cause this phenomenon in a small percentage of the population.

It’s perfectly harmless and simply means that some of the natural pigment in the beets was not digested.