Can Colon Cancer Cause Loose Stools? 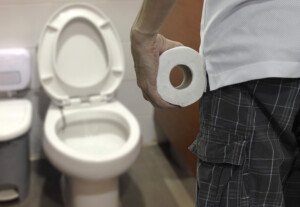 Loose stools CAN be caused by colon cancer.

Though the symptom lists for colon cancer mention the two polar opposites of diarrhea and constipation – that midway point of loosely formed stools is also a possible symptom.

But loose stools is an extremely common phenomenon with many benign causes including a high consumption of fresh vegetables and fruits.

The issue with loose stools being caused by colon cancer comes down to putting this symptom in context.

After all, every single human being sooner or later will look in the toilet to see loose or poorly formed poops: not quite diarrhea, but not formed enough to retain their structure if scooped out of the water.

Or, upon being jabbed with a spoon while still in the water, they fragment.

When Does Colon Cancer Cause Loosely Formed Bowel Movements?

“A colon cancer can cause loose stools if the cancer grows large enough to cause a partial obstruction and create less space — and therefore more force — for the stool to pass through,” says Benjamin Levy, MD, board certified gastroenterologist who’s provided clinical care to patients at Mount Sinai Hospital, Schwab Rehabilitation Hospital, and Sinai Medical Group Touhy Refugee Clinic.

“It’s interesting to note that loose bowel movements associated with colon cancer are more likely to occur on the left side of the colon (close to the rectum).

“Sometimes patients with colon cancer complain of pencil-like bowel movements that are skinnier than normal.

“As a physician, if a patient tells me he or she has been having pencil-like bowel movements, it’s an immediate indication to perform a diagnostic colonoscopy to make sure they don’t have colon cancer.”

These very narrow bowel movements may also be loosely formed rather than solid like putty.

Dr. Levy also explains, “In addition, rectal bleeding is another common symptom of colon cancer and should also prompt patients to seek a colonoscopy.

“In general, patients should seek medical attention if they experience loose bowel movements for more than three days.”

To put this extremely common GI symptom in the context of colon cancer, you must consider the presence – or absence – of other suspicious symptoms of this disease.

The index of suspicion for colon cancer rises when the following are concurrent with recurring loose stools:

Having only one of these symptoms, along with the recurring loose poops, is concerning enough for a colonoscopy, but the more symptoms that are present, the more concerning the situation is.

Keep in mind that other conditions can cause several of these symptoms concurrently such as inflammatory bowel disease, irritable bowel syndrome, celiac disease and infection.

If you’ve been having loose stools but no other symptoms, chances are high that the cause is not colon cancer, especially if you have average risk for this disease.

Smoking is a risk factor for colon cancer, and smoking can contribute to loose poops.