How Common Is Melanoma in Very Dark Skinned Adults?

There is a wide range of skin tones. What many think of as “dark” is actually – on a global scale – medium.

Melanoma in so-called dark skinned individuals doesn’t get a lot of publicity. And the risk or commonality of melanoma in those with very dark skin gets next to zero media coverage.

“Certain skin cancers, such as melanoma, are caused by factors other than just UV alone, such as one’s genetic background,” says Dr. Vashi.

Skin burns and exposure to X-rays are also risk factors. So is having a lot of pre-existing moles, especially if they’re at least the diameter of a pencil eraser.

This is why not every blue-eyed redhead who burns easily and has had childhood blistering sunburns and lives at high altitude gets melanoma.

And why someone with black hair, caramel skin, brown eyes and never a single sunburn in their entire life might be diagnosed with melanoma at age 30.

“Many patients and physicians believe that people with darker skin are immune to skin cancer,” points out Dr. Vashi.

But even those with a nearly black complexion are not immune to melanoma – which, did you know, can develop as a primary tumor inside the nasal passages, the vagina and even in the throat – all places where not a drop of sunlight ever reaches?

And all the natural pigment in the world won’t protect someone from getting ocular melanoma: The tumor begins inside the eyeball or some other structure of the eye!

But what about cutaneous melanoma – the kind in which the primary tumor arises in the top layer of skin (epidermis)?

Yes, nobody – regardless of how dark their skin is – is immune to the locations that this disease can strike.

There is so little awareness about the possibility of melanoma in those with very dark skin, and unfortunately, some physicians just don’t believe this can happen.

“Because of this, the diagnosis is often delayed, at which time it can be potentially fatal,” says Dr. Vashi.

Problem is, those with deep dark complexions are rarely urged to conduct self-skin exams every month.

The illusion that only light people get this awful disease is perpetrated by pamphlets showing melanoma lesions on fair skin, and images dramatizing only Caucasian patients being examined by a dermatologist.

“Taking all of this into account, although melanoma is more common among lightly pigmented people, it can be more deadly among patients with skin of color.”

Another Startling Fact
There is a type of cutaneous melanoma called “subungual” that is much more common in blacks than in whites.

This type of cancer occurs under the fingernail and usually presents as a vertical stripe, band or line of any shade of brown, sometimes with black in it. Treatment at an early stage is crucial for long-term survival. 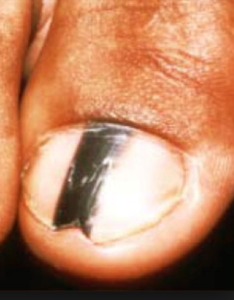 Melanoma of a toenail

But with cutaneous melanoma, few blacks will suspect that a newly developing line or smudge under a nail is a deadly skin cancer.

It also doesn’t help that even when a person with dark skin indeed conducts monthly self-exams, that changes in pre-existing moles will be less obvious, due to the lack of contrast between a brown or black mole and the surrounding brown skin.

If you have a complexion of deep tone, inspect it every month, including the soles of your hands and feet – which are more fair in color.

Get to know your moles. Keep an eye on new growths. Have a clinical skin exam every year by a dermatologist, ideally one who specializes in patients of color.

Melanoma really doesn’t care if you’re as white as sweet cream or as dark as mildly sweet chocolate.

Dr. Vashi is a recognized leader in medical and cosmetic dermatology in the care of patients with skin of color. She currently has many active projects including skin hyperpigmentation, chemical peels and sun protection.