Young Adult Getting Tons of Moles in a Short Period? 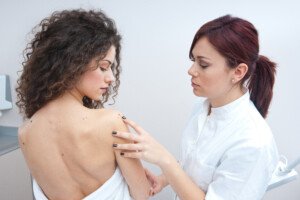 If a teen or young adult gets a bunch of moles in only a short period of time, is this predictive of future melanoma?

Or perhaps some of those new moles ARE melanoma?

It can be unnerving for a young person to suddenly notice the appearance of many new moles – not for cosmetic reasons but due to a fear of melanoma.

Melanoma awareness campaigns have been in full force for years, and many young adults and even teenagers know what a melanoma is and how deadly it can be.

They also know that a mole can transform into a melanoma, and that they should inspect their moles every month.

Dr. Arthur continues, “Heredity influences the number of moles someone may get, but spending a lot of time in the sun can lead to an increased number of moles.

“It is common to see new moles appear during adolescence, which is likely related to hormone changes.”

Moles don’t literally go from invisible to two millimeters or even one millimeter overnight.

Unless a person examines their skin every day, they are not going to notice when that very early mole—the size of a pinprick—has grown 0.3 mm larger.

There may be numerous very new—and tiny—moles scattered about, and there is no way that someone will be aware of this unless they are vigilant about taking their skin’s inventory at least a few times a week.

But then one day the young adult or teen will notice a lot of new moles, especially if they are clustered in one area.

“Hey, where did THESE come from?”

Truth is, they’ve been there all along but had been under the visual radar.

The young person then starts fervently checking all of their skin and discovers more and more moles.

The moles have seemingly come out of nowhere, but in fact, the individual has a new very heightened level of awareness.

If a bunch of new moles has you worried sick over melanoma, have a dermatologist check every single one of them out, regardless of their location or how small some of them may be.