Have You Gotten 50 New Moles in Only a Month? What This Means 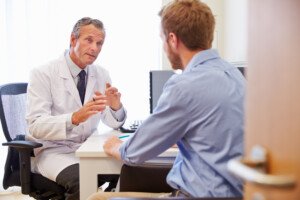 Over the course of just as month, about 50 new moles have appeared on your body.

This brings to mind melanoma or the possibility that out of all those moles, at least a few will develop into a melanoma.

Many people do report that in only a month, dozens of new moles have appeared on their body, up to 50, sometimes even more.

And next month, there’s yet another 50 or so new moles! Could this be a harbinger of melanoma?

First off, just because it looks like a mole doesn’t mean it’s a mole – even if there’s dozens of them newly appearing.

It’s actually possible for 50 or dozens of new moles to begin appearing on one’s body over a short period of time.

It’s “possible but unusual — perhaps in a young person with a genetic predisposition to dysplastic nevi who had a lot of recent UV exposure from the sun or tanning beds,” explains Sharyn Laughlin, MD, board certified dermatologist and co-founder of the DermaEnvy Skincare ™ line of sun protection products and medical director of Laserderm, a pioneering laser skin surgery clinic in Ottawa, Ontario, Canada.

What about an older adult, say, at least 40 years of age?

Dr. Laughlin says, “In an older person these crops of lesions are more likely to be seborrheic keratoses.”

A person whose back is peppered with dozens of seborrheic keratoses might think these are moles.

A seborrheic keratosis usually looks like a mole, especially if it’s dark brown.

These benign skin growths, which begin occurring in middle age, are usually a medium brown, but can be any shade of brown plus mixtures of brown, tan or beige. Sometimes they even appear pink or flesh colored.

There IS the case of a woman, 48, who developed thousands of moles all over her body over a period of six months, and doctors did not know why.

This is considered a very “odd” medical case and is reported in JAMA Dermatology May 18, 2016. In the report, Dr. Hensin Tsao, who treated the woman, calls her case “unprecedented.”

The patient had also developed eczema in the same areas where all the new moles appeared.

To a lesser degree, a person indeed could experience an eruption of new moles, a condition called eruptive nevi (“nevi” is the medical term for moles).

Several of the woman’s thousands of moles turned out to be melanoma, and she will require lifelong strict surveillance, and any additional suspicious lesions will need to be biopsied.

This is a VERY RARE “odd” case!

Chances are, if you have what seems like hundreds of new moles in only a short period, even a month, and you’re around at least 40, they’re seborrheic keratoses.

If you’re younger and especially under 30, they’re probably not seborrheic keratoses, but regardless of your age, it would be a smart move to schedule an appointment with a dermatologist to confirm whether or not any new spots are moles, melanoma or something else.

Melanoma, by the way, is not a common disease, though it’s not rare, either.

In practice for 30+ years, Dr. Laughlin has been lead or co-investigator in many research trials and an innovator in developing new laser technology. dermaenvy.com/cyberderm and Laserderm.