Sudden Fast Heartbeat when Turning to the Side in Bed: Causes 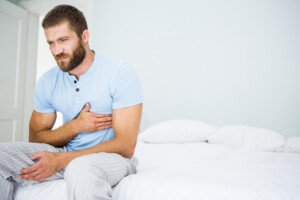 Boom-boom-boom-boom, your heart rate noticeably speeds up simply because you turned over to the side in bed.

Does this mean poor fitness or an arrhythmia?

“Often, people feel their arrhythmias only during a quiet time when they’re not distracted by other stimuli – such as when lying quietly in bed,” says Daniel P. Morin, MD, FACC, Director of Electrophysiology Research and Director of Cardiovascular Research for the Ochsner Health System.

“Turning side to side in bed is not by itself commonly the trigger for an arrhythmia,” continues Dr. Morin.

“A sudden racing heartbeat in the setting of usually a slower heart rate may indicate a heart rhythm problem, especially if it is associated with worrisome symptoms such as shortness of breath, lightheadedness or palpitations. turning over in bed

“Some of the most common heart rhythm problems include atrial fibrillation and supraventricular tachycardia (SVT), but there are many possible explanations for sudden fast heart rates.

A heart rhythm specialist is called an electrophysiologist. This medical doctor diagnoses and treats problems with the heart’s electrical functioning rather than problems with its “plumbing” (arteries).

“Evaluation and treatment of palpitations under any circumstance will depend upon their frequency and symptomatology,” says Dr. Morin.

Many people experience flip-flops, sudden thumping or fluttering, or transient racing of their hearts.

The issue is how often, and if they also feel faint, dizzy, chest pain or weakness during these episodes.

Another issue is the tolerance by the patient. For some, the so-called strong cardiac awareness is intolerable. turning to side in bed

Sometimes no treatment is needed if there are no other accompanying symptoms and the occurrences are infrequent.

“Certain sources of arrhythmia, such as single extra beats like PVCs or PACs, may well be suppressible with certain medications,” says Dr. Morin.

“Other arrhythmias, especially those that last a longer time, such as atrial fibrillation (A-fib) or SVT, may respond well to medications or may be better treated with procedures such as catheter ablation.”

Dr. Morin’s clinical interests are in device therapy for cardiac dysfunction (including cardiac resynchronization therapy) and treatment of cardiac arrhythmias with medical therapy and/or catheter ablation.