If a Scratched Mole Bleeds, Does this Mean Melanoma? 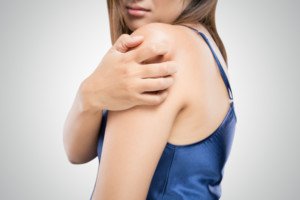 It is nothing short of unnerving to casually scratch a mole and then see it bleed.

The scratching may not even be intended for the mole, but the mole just happens to be in the path of your fingernail.

And then you see a bright red dot forming, and it grows bigger until you realize the mole is now bleeding.

But there is a difference between a mole bleeding from the trauma of a scratch, and one bleeding spontaneously—for no reason – except melanoma.

“Scratching a mole and causing it to bleed will not cause it to become cancerous,” says Dr. Steven Musick, MD, a board certified dermatologist who runs Musick Dermatology, LLC, in Swansea, IL, which provides state-of-the-art medical and surgical care for all disorders of the skin, hair and nails.

Dr. Musick continues, “However, if a mole bleeds on its own with minimal rubbing (like with a towel after showering), that could be a sign that the mole should be evaluated for cancer by a qualified dermatologist.”

To really be sure if a mole has been bleeding on its own, make sure not to traumatize your moles.

If any are in the line of fire from a bra strap, shoe strap, etc., be extra careful when putting on these garments.

When you shave your legs, try to avoid the moles, even though that will be difficult if you have many of them.

But at least make an effort to glide the razor as gently as possible over them. You may want to consider applying a cream that gets rid of leg hair without having to shave.

If any of your moles bleed for no reason, do not hesitate to make an appointment with a dermatologist.

One bleeding episode is enough to raise suspicion for melanoma, even if the spot looks normal otherwise, or you’ve had it since you could remember, or it has not grown bigger.