Is a Mole on the Nipple More Likely to Become Melanoma? 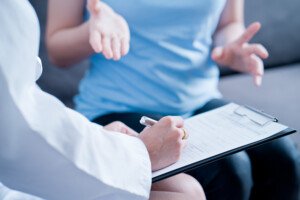 Have you discovered a mole on your nipple — not nearby, but ON the nipple, and are worried it might be melanoma?

Now if it’s never been there before, and you’re over 40, it’s more important to have a dermatologist check it right away than if you’re 18.

This wouldn’t be because of the location on your nipple, but because new “moles” in people over 40 are more likely to be a melanoma than are new moles in people under 20.

“A mole on the nipple is no more likely to become melanoma,” says Dr. Steven Musick, MD, a board certified dermatologist who runs Musick Dermatology, LLC, in Swansea, IL, which provides state-of-the-art medical and surgical care for all disorders of the skin, hair and nails.

“Only one-third of melanomas arise from a pre-existing mole,” says Dr. Musick.

“The highest risk mole is a new or changing mole. The least risky moles are moles that a patient has had for many years without change in shape, size or color.”

Though melanoma is rare in people under 40, it’s crucial that young people start checking their skin every month NOW, and use sunscreen!

Don’t wait until your 40th birthday to scope out all your moles, and then suddenly you have no idea if half of those moles have always been there or are new.

Or, you may have no idea if a particular mole has always “looked that way.”

Get very familiar with your moles TODAY, so that by the time you reach the age bracket at which melanoma starts becoming more common, you will already know just what every one of your moles should look like and how long they’ve been there.

And this includes moles on or near the nipple, behind your ear and on the lobe, on the back of your neck, butt, soles of your feet, between your toes and any on your eyelids or on the iris of your eye.