How Soon After a CT Scan Could It Cause Cancer? 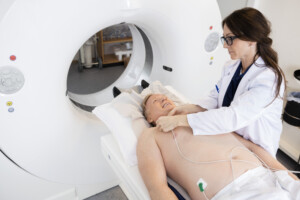 Anyone concerned about how soon after having a CT scan it could cause cancer certainly knows about the “one in 1,000” statistic.

In other words, in past studies, researchers have concluded that the odds of getting cancer from a CT scan were one in a thousand.

However, it’s not that straightforward.

“The risk of developing cancer or any other complication from radiation is multifactorial,” says Resham Mendi, MD, a renowned expert in the field of medical imaging, and the medical director of Bright Light Medical Imaging.

“For example, certain areas in the body (such as the ovaries and testicles) are more sensitive to radiation, while others (such as the brain) are less sensitive,” explains Dr. Mendi.

“We typically attempt to minimize radiation using the ALARA principle. ALARA stands for as low as is reasonably achievable.

“What this means is that we make every reasonable effort to minimize radiation exposure to our patients. We are especially careful with our younger patients.”

Time It Takes for CT Scan Exposure to Cause Cancer

Dr. Mendi says, “If there were to be a cancer or other effect from CT radiation, it would likely be years to decades after the exposure, and it would be very difficult to connect the two, to identify the CT as the cause of cancer, as cancer is most frequently of unknown cause and multifactorial.”

So if a heavy smoker undergoes several chest CT scans over a period of 12 months due to a suspected blood clot in a lung, and then 20 years later develops lung cancer … it would be simply impossible to determine if the radiation from the CT scan caused it or if the smoking did.

Even in a nonsmoker, or in a person who’s always been a health nut, it would not be possible to prove causality between a past CT scan and a current cancer diagnosis.

Of course, one and especially numerous CT scans of the past would be under suspicion in such an individual, but establishing cause of the cancer is beyond current medical technology.