How Long Does It Take Melanoma to Grow to 2 Millimeters? 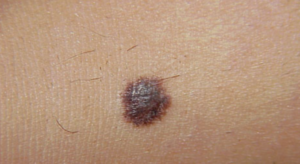 It’s a fact that melanoma can be well under six millimeters, and in fact, can be only one millimeter in diameter.

The ABCD rules for melanoma certainly do not apply to all such skin cancers.

Some dermatologists even refer to very small melanomas as “micromelanomas,” meaning, they are much smaller than a pencil eraser (five millimeters).

A tumor that does not arise from a pre-existing mole doesn’t grow from one cancer cell to two millimeters (tip of unused crayon size) overnight.

“It is completely unknown how long it takes for melanoma to achieve a size of two mm,” says Dr. Steven Musick, MD, a board certified dermatologist who runs Musick Dermatology, LLC, in Swansea, IL, which provides state-of-the-art medical and surgical care for all disorders of the skin, hair and nails.

Though there are, on record, serial images of progressing superficial spreading melanomas, these do not tell how long it took for the tumor to get to two millimeters.

Instead, such images show increase in lateral growth usually from a starting point of over two millimeters, e.g., from three to five millimeters in 12 months.

Prior imaging records are not available because the patient didn’t begin noticing the lesion until it was over two millimeters.

And even if, by chance, a 0.2 mm spot was photographed, and looked benign, and then 12 months later it was two millimeters and looked suspicious, and a biopsy confirmed melanoma, this one particular example would not speak for melanoma in general.

Furthermore, it would be impossible to determine at what point along the timeline of increasing size that it had undergone the malignant transformation.

In short, there just isn’t any data on how long it takes to grow from the very beginning (a few cancer cells or even pinprick size) to ANY particular size.

Dr. Musick explains, “Different melanomas grow at different speeds. Some melanomas spread to internal organs (metastasize) early when they are small, and some later when they are bigger.”

The fastest growing melanoma is the nodular type. It is not flat, hence its name.

The superficial spreading type can grow laterally for three years before it begins growing vertically into the second layer of skin (dermis).

“We do know, though, that detecting and removing smaller/earlier melanomas increases patient survival,” says Dr. Musick.

Don’t wait for what seems like a new mole (especially if you’re over 40) to grow to almost the size of a pencil eraser before having a dermatologist check it out.

Sometimes surveillance is the only recommended course to take. But the “let’s see what happens over the next six months” approach is not only a dangerous approach, but will cause a lot of anxiety.

Why not just have the tiny spot removed and get it over with? A microscopic analysis will reveal so much more than will a handheld lens (dermatoscope), let alone naked eye inspection.

“It looks benign” is always reassuring to hear, but maybe six months later it won’t be. Or maybe it isn’t NOW. So have the mole removed and biopsied so that there is no doubt left.

If you decide not to have it removed because “it looks benign,” at least vigilantly examine it (and the rest of your skin) every four weeks.