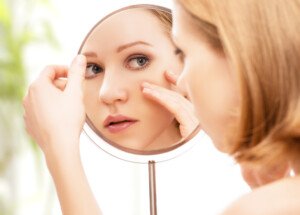 What if you had a very tiny mole and one day, realized it was no longer tiny – yet everything else about it looked perfectly normal?

As you probably already know, one of the guidelines for melanoma surveillance is the “E” in the ABCDEs: evolution.

If a tiny mole is getting bigger, this falls under the evolution category, even if everything else about the mole appears normal.

To best conduct self-exams of your skin, you should note which moles are tiny. If you have a ton of moles, however, it will be more difficult to keep track of them.

In the case of my home mole mapping, which began about 10 years ago, I had drawn various body parts, then inked in dots where moles were.

Having always been able to illustrate, this was easy to do, though even a crude illustration can still help you track your moles.

Tiny Moles – Are They Getting Bigger?

One day in August I did a full body exam, and a mole caught my attention. It just didn’t seem like it had been there before.

I checked my 10-year-old mole map. The mole is located just out of visual range if I’m looking at my outstretched leg from above.

I had indicated the mole, 10 years ago, with an arrow pointing to just under my leg in the drawing, and had put the word “tiny.”

To my fear, the mole I was looking at this month was not tiny. It was at least the same size as two nearby moles – which I’d never consider as tiny.

This was evidence the mole had grown, even though it had never caught my attention in this year’s previous leg checks (March, April, June). And going back further, my last leg exam before March was the preceding December.

I suppose if a tiny mole is growing larger, the growth won’t be noticed right away with skin exams every few months, let alone monthly, but there will come a point when it WILL be noticed.

And August it was.

A few days later was my annual clinical skin check. The dermatologist, viewing it with a dermatoscope, said the mole looked normal, but it was shaved-biopsied anyways. It came back benign.

I swear, though, that mole was larger than it was 10 years ago. I’m middle aged, which is why this was so concerning to me. I had no idea when it began getting bigger.

• Had it been growing all along over the past 10 or more years, ever so very gradually, such that only now I noticed something different?

• Benign moles DO keep growing if they’re relatively new. That’s why many moles are three, four and five millimeters in diameter, sometimes well over six millimeters. If moles didn’t grow they’d all be the size of pinheads.

• All the larger moles on your skin were once very tiny.

• Or…was this mole “tiny” all this time, and only in the past few months it began growing, making it highly suspicious?

As a veteran home mole mapper, here is my advice:
Notate every mole that you consider tiny. Maybe that’s less than one millimeter to you. Maybe it’s small enough for you to think it’s a “cute little mole.”

But just notate them. Then, when you do your skin exams, see if all the moles on your skin, that are notated as tiny, are still tiny.

This way, if any start getting larger, you’ll have an idea of a time window during when the increased diameter began occurring.

But remember, it’s always possible that a tiny mole is destined to benignly grow to three times its diameter before it stops.

That may have been the case with my once-tiny mole – but I didn’t want to take a chance, even though the doctor said it looked normal.