Causes of Tinnitus when Chewing Food or Gum 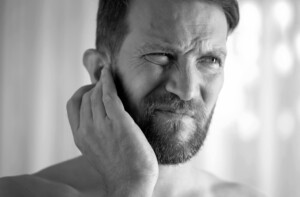 Do you find that sometimes when you’re chewing food or gum, you get tinnitus or a “ringing” in your ear?

There are several reasons why chewing can bring out a noise that seems to be coming from inside your ears.

Tinnitus is defined as a subjective experience of hearing a sound that seems to be originating from inside the ear.

Usually it’s heard in both ears at the same time. The sound can vary, but a common presentation is that of a steady, very high but faint tone, or a hissing sound.

Others may hear chirping, tinkling or thumping.

“Tinnitus can be experienced by some individuals when chewing for the following reasons,” says Rivka Strom, AuD, CCC-A, Director of Audiology, Advanced Hearing NY Inc.

“The chewing muscles are near the muscles that connect to the middle ear and may have an effect on tinnitus,” continues Strom.

“Additionally, there is a ligament connecting the malleus, a middle ear bone, to the jaw.

“Further, there’s a connection between the centers of the brain that control the muscles for chewing and those connected to the auditory system.

“Those who suffer from TMJ (temporomandibular joint), located in front of the ear where the jaw bone connects to the temporal bone of the skull, thus may experience tinnitus given the close proximity of the joint to the ear.

“Those with pre-existing tinnitus may experience worsening symptoms when chewing or with any general discomfort with TMJ disorder.

“Some believe the ringing is caused by the contraction of the jaw muscles and not by the joint itself.

“In this case, avoiding grinding and clenching teeth and relaxing the affected muscles would help reduce or eliminate the tinnitus.”

• Another thing you may want to try is less aggressive chewing.

• Don’t rush through the eating process.

• Don’t talk with your mouth full of food, either.

• Have a glass of water handy to reduce the need to chomp at food that requires a lot of chewing.

• Cut back on eating the foods whose required chewing dynamics aggravate your tinnitus the most.

Finally, consult with a dentist regarding treatment of TMJ disorder.